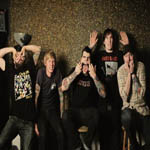 Jacksonville, FL hardcore act EVERGREEN TERRACE has announced ‘Almost Home’ as the title of their upcoming release and follow up to 2007’s ‘Wolfbiker.’

The band is also entering Orlando, FL’s Audio Hammer Studios Jason Suecof (Trivium, The Black Dahlia Murder, Job for a Cowboy) who will be recording vocals and handling mixing with the rest of the recording taking place with Stan Martell at Martell Studios in Kingsland, GA.

‘Almost Home’ is set for a September release.