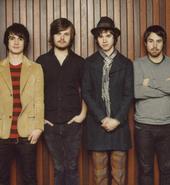 It seemed like only yesterday that we brought you news of guitarist/primary songwriter Ryan Ross and bassist Jon Walker splitting from Panic At The Disco. (Actually, it was about five hours ago.) Remaining members Brendon Urie (vocals) and Spencer Smith (drums) have issued a statement in response to Ross and Walker’s departure on their blog:

“We just wanted to let you know, that the news of Ryan and Jon leaving the band is unfortunately true. It’s been an amazing journey being in a band with them, but sometimes individual tastes take friends in different directions and you can’t ignore it. They are some of the most talented guys we know, and we’re sure that whatever they do next will be great. That said, Panic At The Disco is alive and very very well. We are working on new songs that we are excited for you to hear. Our dates with Blink and Fall Out Boy start in a little less than a month, and we wouldn’t miss those for the world. We know everybody has a lot of questions at this point with everything being so out of the blue, most of those should be answered in the coming weeks. We appreciate every one of you, and hope you continue with us on this incredible ride.”

UPDATE: Rumors are already swirling the internet regarding who will be replacing Ross and Walker on the band’s upcoming tour with Blink-182. One gossip site in particular is reporting that Matthew Murphy and Tord Overlond-Knudsen from U.K. group the Wombats will be joining the band — according to Panic’s manager, Bob McLynn, this is “not true.” He has also told us Urie and Smith have made no decision on new members as of yet, but when they do, the information will be exclusively on AltPress.com.

We’ll have more on this story for you as it develops.