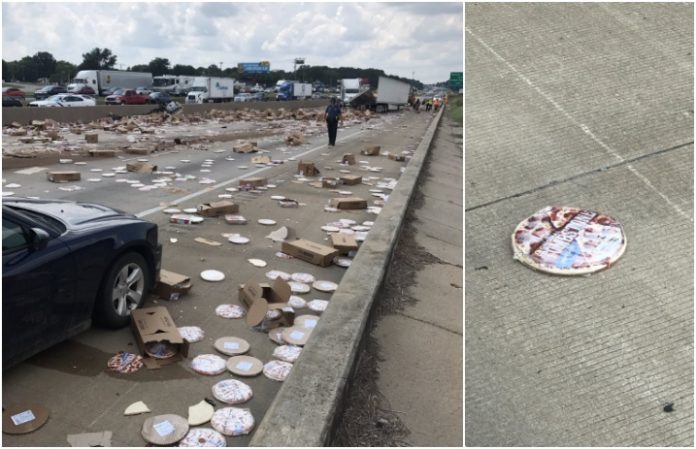 Ah, Digiorno and Tombstone pizza lovers were in for quite the disappointment (or treat?) on Wednesday when, in Arkansas, a truck carrying the pizzas crashed on a highway, leaving pizzas everywhere—kind of like Cloudy With A Chance Of Meatballs, except in real life.

See the photos below!

Read more: Pizza ATMs being shipped around the country

Arkansas Online had plenty of footage from the crash on Interstate 30 in Little Rock, and thank goodness no one was injured. But, as they report, there were plenty of “pizza fatalities.”

Look at all the sauce.

It's not delivery, it's (1,000) DiGiourno! Crews scoop up pepperoni pies plastered on I-30 #ARNews pic.twitter.com/2SV9JdLqg1

Look at all the pizzas.

RIP to all those pizza pies that’ll never get a home.

A tractor trailer slammed into the Mablevale Overpass on I-30, causing frozen pizzas to cover the interstate, blocking all traffic. @THV11 pic.twitter.com/qG4zJ8SqGp

What are your thoughts on the pizza tragedy? Let us know in the comments below!