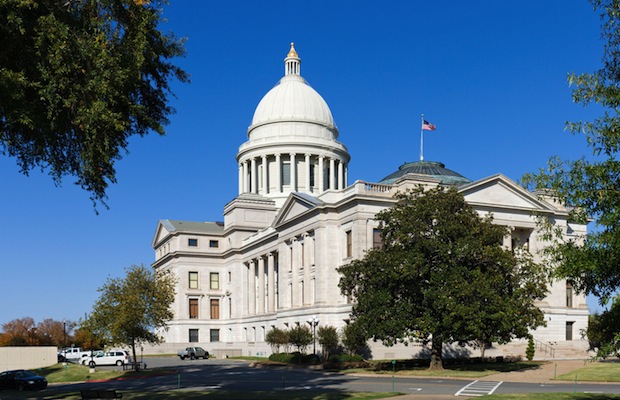 A news item that resurfaced today involves the Arkansas state legislature, which, by an overwhelming majority of 26-4 in its Senate, recently passed a bill that would ban certain tattoo procedures and piercings, specifically scarification and dermal implants.

The initial bill, which was amended upon reaching the House, and subsequently made less invasive in its final form, was sponsored by Senator Missy Irvin of Mountain View, Ark., and can be viewed in full here.

Scarification is the practice of branding or cutting into the skin to form permanent scars; essentially, a tattoo without ink. Dermal implanting, though commonly considered to be a body modification in which jewelry is placed underneath the skin and allowed to heal, or embedded into the skin as an anchor, was broadly and vaguely defined by the initial bill as basically any nontraditional piercing.

Example of scarification, via Wikipedia.

Senators argued in favor of the proposal by pointing to an increased risk of infection associated with nontraditional body modifications, though did not provide tangible health research to support this claim. Arkansas tattoo and piercing artists, for their part, argued that the bill's definitions were “contradictory and vague” and “failed to address the more intensive forms of implants the Health Department intended to target.” Though all parties involved agreed that the body modification industry should be regulated and have reasonable restrictions and certification requirements, the issue in question was whether the government should have the right to limit current practices, especially those that posed no risk to the individuals consenting to the modifications, or to those around them. Additionally, artists raised concerns about unsafe, unlicensed black market procedures if, in fact, current practices were outlawed.

Example of a subdermal implant, via Wired.

Senators in favor pointed to scarification and dermal implants as relatively unpopular procedures in Arkansas at this time, and hoped to curb them while they still remain less common, pairing their argument with general concern for public health. Senators in opposition found the bill to be invasive, and overreaching in the role of government. Nonetheless, it was passed.

Upon reaching the House, an attempt to compromise following local outcry saw the bill amended in way that could be considered a partial victory for the tattoo and piercing artist community. In its amended form, ultimately passed by the House as well, the specific ban on scarification was removed from the bill, to instead be regulated by the State Board of Health, and dermal implants were more specifically defined to ban only subdermal implants, fully enclosed by the skin, rather than microdermal implants, which protrude. Subdermal implants are already regulated on a federal level, as they are considered to be a form of invasive surgery.

Some concerns have still been raised as to the vagueness of the bill's language, and the restrictions it still imposes. However, the less harsh version of the bill's final form is a testament to the power of a community voicing its opinion and pushing for representation. If nothing else, the bill's initial form could serve to create a dialogue about the mindset, perception, and state of body modification in the the U.S. at present.

Let us know what you think of the Arkansas legislature's decision in the comments. Should nontraditional body modifications face any sort of regulation or ban? Does the government have the right to limit acts of personal expression?