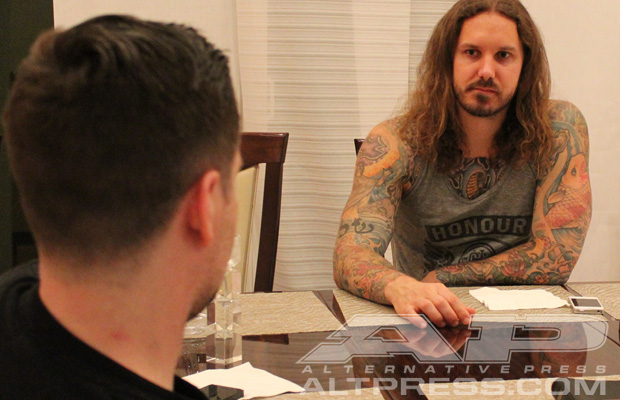 As I Lay Dying frontman Tim Lambesis has taken to Facebook to release a lengthy statement, speaking out for the first time since his release from prison in December 2016. Lambesis was incarcerated in 2014 for conspiracy to commit murder.

Read more: As I Lay Dying reportedly making a comeback, new music in the works

The statement was made via the As I Lay Dying Facebook page, where Lambesis expresses his remorse over his past actions and apologizes for the hurt he has caused.

According to someone familiar with the story, back in 2013, Lambesis asked a person at the gym if they knew any hitmen. That person from the gym then called the police, who then set up a sting. Lambesis was arrested after giving an undercover officer an envelope with pictures of his wife of eight years, her address, alarm codes and $1000.

Lambesis received a six-year sentence in early 2014, but was released on December 17, 2016. Not much has been heard from Lambesis since besides for a few stories and rumors of new music in the works. “I’ve remained silent to the public since expressing remorse at my sentencing because time seemed like the best way to promote healing,” Lambesis says in his statement. “Today marks the first opportunity to freely apologize without any motivation to gain favor from the courts, as I have now completed the entirety of my legal sentence.”

You can read the frontman's statement in full, below.

“Words cannot begin to express how deeply sorry I am for the hurt that I have caused. There is no defense for what I did, and I look back on the person I became with as much disdain as many of you likely do.

First, I apologize to my former wife and remarkable children for my appalling actions. There’s not a single day that goes by where I don’t wish I could undo the damage I caused, and out of respect for their wishes I will not discuss anything else about them (now or in the future). I also ask anyone reading this to promote healing for them by respecting their privacy and defending them from any negativity or anger which should be directed towards me. I was the sole offender and the only one to blame for everything that happened.

To my family, I apologize for the trauma you faced and may still feel. This is an ongoing sentence many of you serve because of me. I am so sorry to my friends who were betrayed by everything I hid from them and all the hardships I caused people who used to work with me. Band mates, road crew, managers, attorneys, agents, label people, and more all had to suffer through many unexpected changes because of my actions. While they were dealing with the aftermath of my arrest, I responded toward many of them with bitterness that I should have directed toward myself. I know that I can’t undo the animosity I brought their way, but I hope to mend what I can now as time goes on.

To the people who looked up to me as an artist, I let you down in so many ways. I tried to show my best side to the public, while feeding an ugly growing monster behind closed doors. I wrote lyrics about the person I wanted to be rather than the person that I was. I was living a life that lacked empathy and viewed everything through a self-motivated lens.

I cannot say for certain what life looks like going forward as so much is different now and I’m still learning. Music always has and always will be a part of me, and has helped me get through the darkest parts of my journey. However, this apology is not a part of promoting anything. Rumors circulate, and that’s something I’ve learned to accept, but this apology is just that, an apology to everyone around me.

I’ve remained silent to the public since expressing remorse at my sentencing because time seemed like the best way to promote healing. Today marks the first opportunity to freely apologize without any motivation to gain favor from the courts, as I have now completed the entirety of my legal sentence (including the completion of all parole/probation requirements). Let it be clear that no amount of time served can right my wrongs. I do not feel deserving of a second chance and am not asking for anyone’s trust. The way many people feel about me makes sense, and only time will tell if my future actions line up with my remorse, something I pray for every day. In the last five years, the ripple effect of all my actions has extended further than a written statement can address. Thus, I will continue to apologize in both words and actions moving forward.

Thank you for reading,
Tim”

As I Lay Dying formed in 2000 by founding member Lambesis. The first full lineup was cemented in 2001. Before 2013, the band released six records.