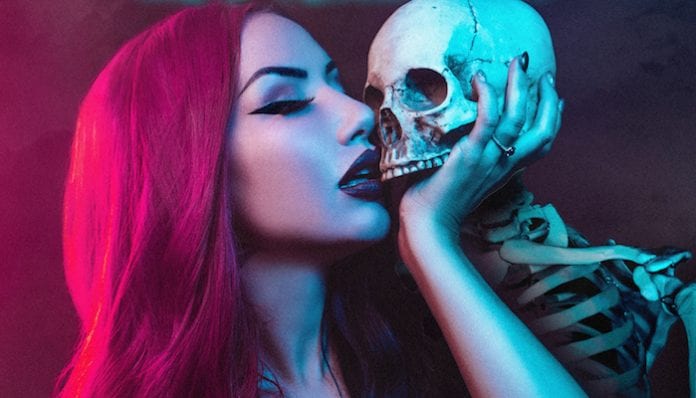 Ash Costello of New Years Day has posted a hilarious video of her mastering the ultimate Halloween dance that pretty much made our day.

Costello posted a side-by-side of her mastering the iconic dance of a person wearing a pumpkin on their head to the Ghostbusters song.

This video, which originated from KXVO News in Omaha, Nebraska, has become a meme that circulates all over the internet once fall rolls around. In case you haven’t seen it, check it out below.

Many people on the internet have since learned the dance and recreated it themselves. And of course, our spooky queen had to partake on the fun.

“I’ve never EVER received so many direct messages about how something made someone’s day! HAHAHAHAHAHA like WHAT?” Costello wrote.  “So I guess I’ll post this here for you to enjoy. If anyone wants a glimpse into what it’s like to be me, this is as accurate as it gets. Silliness. Goofiness. Fun.”

She also challenged her followers to recreate the “pumpkin dance” to get in the mood for October. The musician honestly nailed every move perfectly, and you can see the hilarious video for yourself below.

🎃🎃 PUMPKIN DANCE🎃🎃 I’ve never EVER received so many direct messages about how something made someone’s day! HAHAHAHAHAHA like WHAT? So I guess I’ll post this here for you to enjoy. If anyone wants a glimpse into what it’s like to be me, this is as accurate as it gets. Silliness. Goofiness. Fun. Happy! I challenge you to also recreate the pumpkin dance!!!! Also @nattaliet this was for you!

A few days ago, New Years Day unleashed a brand new music video for their track “Come For Me” featuring many familiar faces and some kickass production.

Directed by Robyn August and produced by Matt Phelan, the music video features many recognizable faces throughout.

Costello takes on the role of the hooded vigilante “Ash” who has been taking down members of the Hex Syndicate gang.

Check out the official “Come For Me” music video below!

New Years Day have been supporting In This Moment on huge Halloween-themed tour alongside Motionless In White and Ded. Tickets for all dates are available here.

Check out the Mother’s House of Horror Traveling All Hallow’s Eve Masquerade cities and dates below.

What do you think of Ash Costello recreating this pumpkin dance? Sound off in the comments down below!