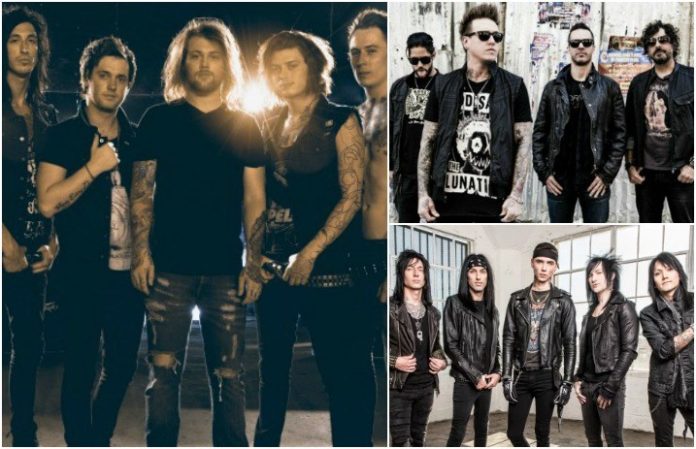 Asking Alexandria are up to something… But we have no idea what! The band's account has been teasing something called “Into The Fire,” but there's still no word as to whether it's an album title, a new supergroup band, a video, a single, or something else entirely.

Here's what we know so far.

Asking Alexandria's twitter account posted these pictures, teasing “Into The Fire” with the help of some famous friends, Jacoby Shaddix of Papa Roach…

…and CC from Black Veil Brides.

There is also a brand new Into The Fire Instagram account where they've posted the photos as well.

Danny Worsnop has just had a new photoshoot, as he mentioned on twitter. Possibly new band promos? Album artwork photos? We don't know!

Just did a bunch of videos for you guys on https://t.co/z9W9ff6MgU

Tomorrow I'll be in and out of photoshoot day so help me fill my time!

Whatever “Into The Fire” is, it's coming out on September 21, so we'll find out soon enough. In the meantime, fans are doing some serious theorizing. Check out some fan theories below!

What the fuck is this #INTOTHEFIRE HELP ME IM DYING ITS NEW @AAofficial ISNT IT?!

ok so I'm thinkin #intothefire is the name of the album with diff musicians featured on it..

guys just a thought but, #intothefire could be a song from the soundtrack of American Satan pic.twitter.com/hEsukkbDn0

Honestly, we have no idea. Though we would definitely not be mad about an Asking Alexandria furniture line.

What do you think Asking Alexandria is up to? Theorize with us in the comments below!