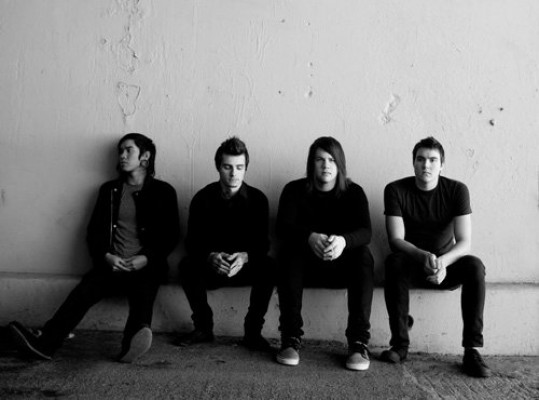 Attack Attack! bassist John Holgado has announced his quitting the band and has posted the following lengthy explanation on his Facebook page. Holgado admits to having struggled with his identity, his family and with depression. He also advises fans to “stop cursing,” on a sidenote. Holgado isn't the first Attack Attack! member to leave the band for a highly specific reason. In 2010, former vocalist/guitarist Johnny Franck left to “refocus on God.” Read Holgado's entire statement below:

“To whom this may concern, this is John Holgado and I would like to officially announce my departure with Attack Attack!

To clear things up in a very cliche manner, Andrew Whiting, Andrew Wetzel, and Caleb Shomo have been and will always be some of my best friends. The reason I decided to leave had only been lingering in my head for the past 6 or so months. If only I had a way to state this reaso
n but it simply is more than just a resolved answer because what is relevant with why I left, concerns the past 2 of the 5 years we have toured as a band. For those who've read this far, you now know I've left, and to the readers who would like to hear what has almost ended and could have taken any relationship I could ever imagined with my friends, family, and especially… my self .

(To lighten up the mood I have to announce I just lit up a cigarette for this next part. Also, smoking is bad)

Well those who have continued reading, I could not thank you enough to be open ears to what is to be my first ever attempt to voice what I have to say in the years I've been with AA!

These have been the best and the absolute worst past years of my life and I know that for a fact. Nothing will replace all of the memories I've made with the countless amounts of friends and or what I consider a part of my family that I've been gracious to meet. I, today, for once have reviewed my life in my head in a positive way. I really do mean that. I say that, because what I learned was wrong growing up as a kid, I slowly, so slowly over the years of touring began to think was right. I'm not intending to skew being in a band or touring or anything involving music. I am admitting, and fully embarrassing myself in front of you all because I hope one day, at least one of you will reconsider ever taking what your parents granted you the opportunity with, which is the ability to live.

I today, am admitting that I am was/were/have been/am clinically depressed. Why such a confusing statement? Because my book doesn't end at the first chapter. I would say the first chapter would be first and foremost, distancing myself from something everyone else has in common.. My blood related family and relatives.

My family meant the world to me, they raised me to what they thought was best, patient enough to deal with my flaws, and supported me every single bit of the way to success that I myself would try and reach. What went wrong though? The lack of communication, of myself and to others.
I hate to make this public but I come from a split family. My parents tried so hard even though they went through what had to happen to make my brother, sister, and myself happy. What took me away from this seems like touring, but again was myself. Please If you could take anything from this if you've made it this far, is to accept who you are, who you were, where you came from, and what you will be. I cannot reiterate enough how valuable your own identity is.

This is where I chose to embarrass myself…. I am fully aware that anyone could judge me or point fingers and laugh but hey, I'm enjoying my life as of now and nothing will ever bring me below where I've already hit.

I slowly without the guidance of my parents, was doing life on my own at the age of 16, dropped out of high school and hit the road. Your brain is such a valuable thing that everyone is born with, but not a single one would ever be like anyone else's… Unless you have the capability of repetitive negative thoughts. I am saying this because I hope that by reading this, you at least know what really DID happen to me, and how powerful your brain really is.

With these years of touring without a guiding light, I unintentionally trained my brain to accept that the fears in my head, are the fears in front of me.
I cannot even begin to tell you how many days have went by on and or off tour where I have legitimately, lied in bed the whole day looking at the ceiling. Seems so simple to fix right? Just get out of bed and do something why don't you? Well that's where my family again is relevant to this situation. I tell you, I absolutely did not listen to anyone or anything, and excuses became my most comfortable flaw… It literally, and LITERALLY, took me taking a chance at raising a 8 week old pup on my own. My god the first three days were hell. Over and over my anxiety and depression triggered my brain that this is a useless act of selfishness. The dog would seem to never listen. My impatience was already over my head… I did not have a positive chance in even thinking I could make a change for the better.

It suddenly clicked in my head..
I simply never listened. That moment was the first step in changing my life, and what felt so good about it, was unselfishly, it was for myself. A ease was off my shoulders but a boulder still remained… And it gets more embarrassing..

For months now I've thought that I was homosexual.

This is where my oh so creative conscience was capable of making me fear what I feared.. I am no way saying that being homosexual is a bad thing but to me, it felt like such an unaccepted way of life by my peers. Oh it killed me until this day that every moment I woke up, someone would publicly acclaim it, and I would… I really don't know. This is in the meantime in my conscience of me laying looking at the ceiling.
This is real stuff. I wouldn't have announced this if I didn't intend on bettering myself, or having the smallest chance of helping one of you.

Ill reiterate, train your brain to focus on what you know is right, and not what is and or has surrounded you. Not everyone is perfect so I'm not saying that the people who make it to this will be saved or meet my criteria but hey it's worth a shot because I suffered enough and so badly alone that I would never, ever want to hear what happened to a life I once cherished, to occur again.

The flaws above we're only some of the “identifying traits” that we're so skewed in my head.

Why were my views so skewed?
Because of the uncomfortable surroundings I became ever so comfortable in.
I'm not saying this to point fingers or hate or burn bridges but I have your attention and this is what I have to say.

Two things I hope you take my advice on with never choosing to disobey. Please….

You are what you are around.

You are, what you think.

I wish you could feel my heart beating right now… This is where I knew I confidentially could reveal all of this to you.. Saying everything above was the boulder I have been waiting to get off my shoulders for the past two years…. I've accepted my thoughts which were skewed by flaws, my actions that were unintentionally developed by who I was around.

Since you kept reading, and by now have your attention, I feel comfortable to tell you guys this,

Think about it, as simple as saying “f*ck that band” will skew the relevance of instead saying “eh, I don't really like them.”

Or if you say dude that's gay,
You could just not say gay at all and grow up and say something much more positive… This list could go on…

Also… Please surround yourself with what your heart feels is right. If you can't sleep at night, consider your thoughts by the end of the week while your conscience is talking to you before you goto bed, and wake up to the next day intending on being comfortable in a comfortable supportive environment. Your family is what I recommend. If you claim no family then your legal guardian. There's a reason that those people are feeding you everyday… Because they want you to succeed.. Some things fear mongers will retreat from.

Do not be defeated, instead try what seems to hurt you in order to make what you know is right. Sacrifice….
Whether its friends… Items, imaginary people… And I really mean that, I'm not smiling after that last point… You are what you think.

All good things come to an end,

And now I can finally breathe.