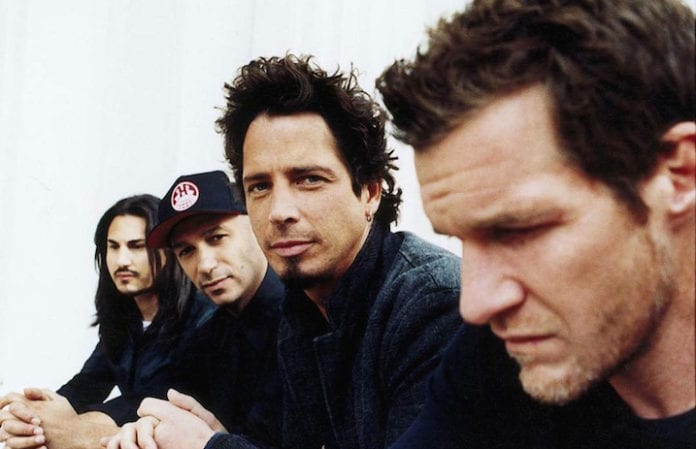 Members of Audioslave delivered a powerful tribute to Chris Cornell at Wednesday's Prophets Of Rage gig in Germany. Check out some footage of their touching instrumental performance of “Like A Stone” below.

Guitarist Tom Morello, bassist Tim Commerford and drummer Brad Wilk—also the instrumentalists from Rage Against The Machine—were left onstage by their fellow Prophets of Rage members  (Public Enemy's Chuck D, Cypress Hill's B-Real and turntablist DJ Lord) to perform the hit Audioslave song without Chris Cornell's vocals. In the late Soundgarden and Temple Of The Dog singer's memory, a lone microphone stand was illuminated by a spotlight.

Fan video from the concert shows the crowd emotionally belting out the lyrics to “Like A Stone” while the band played the tune. Last week, Prophets Of Rage performed the song with System Of A Down's Serj Tankian at Rock im Ring.

On Instagram, Morello posted a photo of the “Like A Stone” performance and noted that “the crowd sang beautifully.” He added, “Miss you, brother,” and included the hashtag, “#EmptyMic,” signifying Chris Cornell's absence.

Chris Cornell died last month following a Soundgarden concert in Detroit. The vocalist, who was 52, apparently committed suicide. Longtime friends and collaborators of Cornell—including Eddie Vedder—have spoken in his memory.

Watch some in-crowd video footage of the Prophets Of Rage's sentimental “Like A Stone” performance from the suriving Audioslave members, complete with the emotional audience sing-along, right here on Instagram:

“Like A Stone” was the biggest hit by Audioslave, the band featuring Cornell, Morello, Commerford and Wilk that were active from 2001 until 2007. The song appeared on their 2002 self-titled album and peaked at No. 31 on Billboard's Hot 100. Prior to Cornell's death, the band reunited for what would be their final gig together at Prophets Of Rage's Anti-Inaugural Ball earlier this year.