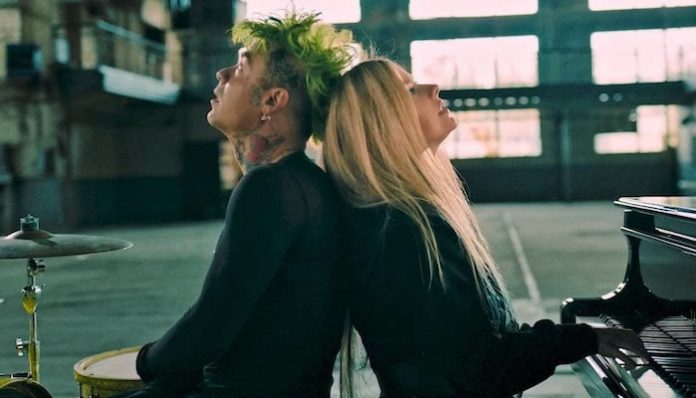 Earlier this month, MOD SUN offered another taste of his forthcoming album with “Flames,” his powerful new collab with Avril Lavigne.

Now, the duo has reunited for a fiery new video for the single. As well, it looks like MOD SUN teased the name of his upcoming LP in the visual.

Read more: Alex Varkatzas dissing Atreyu’s song without him is weirder than you think

Over the past few months, MOD SUN and Avril Lavigne have been collaborating closely together in the studio. Both artists teamed up with legendary producer John Feldmann for their upcoming albums, a partnership that eventually led them to working in the studio together.

After weeks of teasing a possible collab, Lavigne and MOD SUN kicked off 2021 with their new single “Flames.” As Lavigne shares, the duo instantly connected the very first day they entered the studio together.

“Mod and I had an immediate connection from the first day in the studio,” Lavigne says. “He’s an incredible artist and producer. This is the first of many. Proud of what we made with ‘Flames.'”

For MOD SUN, he thinks Lavigne has one of the best voices in music, an aspect that made their collab on “Flames” even more exciting.

“Avril Lavigne has one of my favorite voices in music,” MOD SUN says. “It’s so strong and confident, yet filled with emotion and one-of-a-kind inflections that only her voice can do. This song holds a lot more weight than meets the eye. There’s a very deep message within it.”

Now, as promised, Lavigne and MOD SUN have reunited for a fiery new video for “Flames.” In the visual, MOD SUN can be seen dealing with turmoil in his life while contemplating how he got to where he is now.

Throughout the video, both MOD SUN and Lavigne simultaneously switch between piano and guitar, for Lavigne, and drums and guitar, for MOD SUN, showing off their multifaceted musicianship. Collectively, the “Flames” video conveys both artists’ passion for the new music they are creating while letting the relatable themes of the song play out in front of the viewers’ eyes.

Along with all of this, the title for MOD SUN’s upcoming album is actually hidden in the video.

Watch closely……I just announced the name of my album too🥺https://t.co/xlaiMkqdUy

Eagle-eyed fans quickly spotted the album title at the very beginning of the “Flames” video. The visual opens up with Lavigne sitting in a grim graveyard. The camera quickly pans to a gravestone with the words “Internet Killed The Rockstar.” Coincidentally, MOD SUN has changed his name on Twitter to this phrase, seemingly confirming that his new album is called Internet Killed The Rockstar.

MOD SUN’s new album officially arrives on Feb. 12 via Big Noise. So far, fans have gotten a few tastes of the forthcoming LP with the tracks “Bones” and “Karma.”

As for Lavigne’s new record, it looks like she is collaborating with more than just MOD SUN and John Feldmann. Earlier this month, she shared a few rare studio photos of her with both MOD SUN and Machine Gun Kelly. One of the photos even shows the Tickets To My Downfall artist stepping into the recording booth to record some vocals.

Back in January 2020, Travis Clark shared that he was actually working in the studio with MGK and Lavigne. The We The Kings frontman exclusively told Alternative Press that the trio collaborated together on some new music. However, it’s unknown if this project will appear on Lavigne’s upcoming album.

“[With Avril], she was like, ‘Hey, I see that you post pictures with your buddy Machine Gun Kelly. Do you think you would want to write?’ And I was like, ‘Yeah!’ So I texted him. I was like, ‘Yo, you want to work on a couple [of] songs with me and Avril for her record?’ And he said, ‘Absolutely.’ So that all parlayed and ended up snowballing into each other. I end up in really cool sessions that I just never thought I would ever really be a part of.”

What are your reactions to the “Flames” video? Do you want to see Avril Lavigne release a collab with Machine Gun Kelly next? Let us know in the comments below.