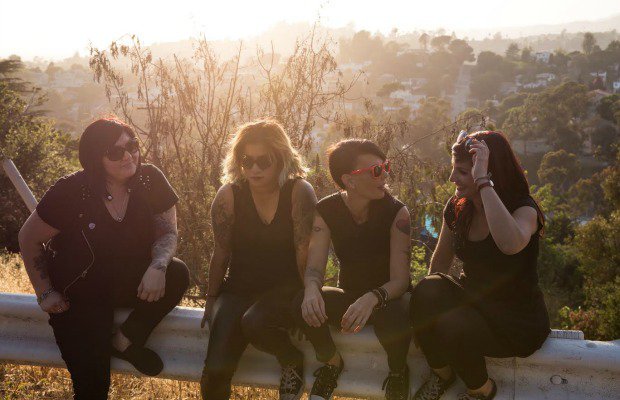 The California punk-rock outfit Bad Cop/Bad Cop probably had a worse weekend than you, after both of their vocalist/guitarists were robbed of their personal items.

The first incident took place early Saturday morning as the band rolled into San Antonio, Texas, which was where they were stopping that night on their tour supporting the Interrupters.

Although the thieves were unable to get into BC/BC’s trailer that morning, they did make away with vocalist/guitarist Stacey Dee’s laptop and Takamine acoustic guitar with electric pickups, which were both in the band’s van. The guitar can be seen in the band’s post below, and has a distinct red wood body, with a fret board and f-hole that feature sun and moon inlays. Anyone in and around the San Antonio area is encouraged to keep a look out for the instrument.

That night, some fans were gracious enough to donate some money to Bad Cop/Bad Cop in order to replace the items, but one sour apple took even more advantage of the members. The other vocalist/guitarist Jennie Cotterill had her purse stolen from her that night, which was not only filled with the band’s funds, but also Jennie’s money, as well as her prescription glasses, house keys, and other personal items.

These sorts of situations are absolutely uncalled for, but it’s always nice to see people stand up and help out the band. There are a couple ways you can help out Bad Cop/Bad Cop, with one being a donation via PayPal to [email protected] Another would be to go pick up their debut album, Not Sorry, which was released in June of last year.

Read More: 12 must-see tweets from the scene this week

And after mentioning in an interview earlier this month with Dying Scene that she would like to play Saturday Night Live, Stacey Dee saw another fan jump to her request, starting petitioning pages on both Facebook and Twitter. Go help Bad Cop/Bad Cop and Stacey achieve that dream by following the pages, and put the band in good spirits. No one likes getting ripped off.