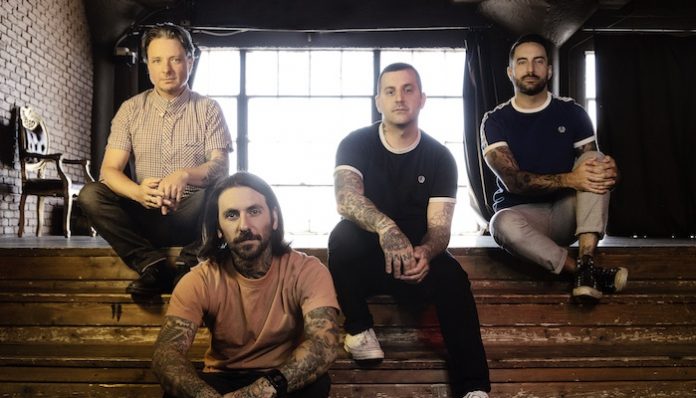 Bayside is celebrating their 20th anniversary with the 20 Years of Bad Luck tour and they’re bringing along scene faves such as Senses Fail and more.

The band dropped their latest album Interrobang in October.

Singer Anthony Raneri says the album was going to happen whether people liked it or not.

“We wanted the record to feel exciting and new, but also sound like a natural progression for the band,” Raneri states. “We just wanted to keep the listener on their toes – there is a ton of information being thrown out – and if you want to take it all in – you can’t stop paying attention for a second.”

“Love it or hate it, we wanted the record to invoke something in people. We said with this record we either wanted to create something great or fall on our faces. Negative or positive, we just didn’t want the record to be ‘fine.'”

Now Bayside are celebrating their twentieth year together with a national tour.

The band took to Twitter to announce the 20 Years Of Bad Luck tour.

We’re so excited to announce our 20 year anniversary tour with @SensesFail @HawthorneHgts and @cantswim_, and to celebrate this amazing milestone with the fans that have allowed us to exist this long. Presale and VIP available now at https://t.co/APt7IiRpIt. #20YearsOfBadLuck pic.twitter.com/pqM6qe9Q9m

“In our early years as a band, we never would have imagined that we would have been celebrating twenty years but we did always know that we wanted to be the kind of band that stood the test of time,” they say in a press release.

“While we wanted to celebrate the music that we have made over the last twenty years, we also wanted to be able to thank the fans for always allowing us to be who we wanted and for all the support.”

The show will also showcase a Bayside Museum where fans can see collections of photos and artwork spanning through their career.

Presale tickets are available now and can be found here. General admission goes on sale Jan. 30, 12 pm local time. Check out the full list of dates below!

Read more: Bayside harness all of their strengths with ‘Interrobang’—review

Will you be catching Bayside on the 20 Years Of Bad Luck tour? Sound off in the comments below!