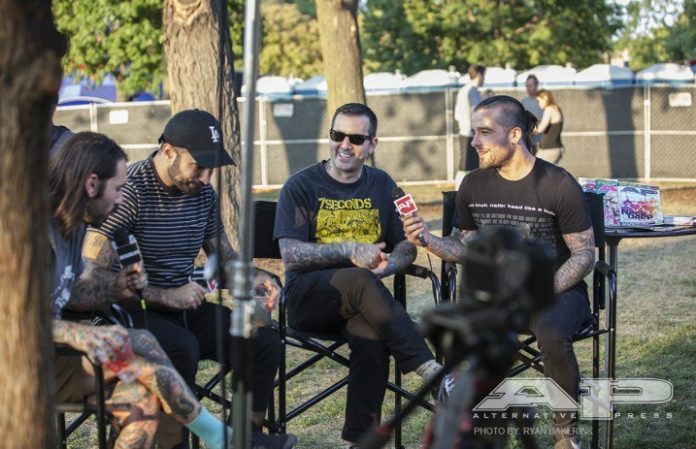 During Riot Fest this past weekend, Bayside discussed their third studio album The Walking Wounded and reflected on what makes the record so special. The album was released in February 2007, and the band recently announced The Walking Wounded 10-year anniversary tour.

Read more: 10 more albums turning 10 this year, from Arcade Fire to the Academy Is…

Frontman Anthony Raneri commented that Bayside went through “a whole lot of stuff,” both as a band and as people, during the making of the record — especially with the new addition of drummer Chris Guglielmo after the death of John “Beatz” Holohan.

“That record [was] a physical proof that we could get through the hard times,” Raneri says. “We’re doing the record at the shows to celebrate that time in all of our lives, [more so] than…celebrating the record.”

The anniversary tour sees the band playing the entire record in full — some very old songs that haven’t been played in a while and about four never played live before.

“It’s a lot of fun because a lot of bands stick to similar songs, and these are the songs we haven’t literally played together since we tracked them,” Guglielmo says. “So technically we never actually played them together. It’s fun having to play with the puzzle onstage as opposed to worrying about the pacing of the set. [You’re] literally having to think while you’re playing them: This isn’t a muscle memory thing anymore, it’s a ‘I’m thinking.’ It makes it exciting.”

“Nervous energy is good,” Raneri adds, “and it’s kind of rare that we put ourselves in a situation where there’s nervous energy.”

Surely bands have favorite songs to play live from their records, and Bayside are no different. Having not played some songs from The Walking Wounded in a very long time, Raneri is most excited to play thoughtful track “Popular Science.”

“[It’s] my favorite song, the last song on the record,” he says “I just love it. Even now when we’re playing it, it’s a song we almost never play on tour. So playing it all these days, all these nights that we play it, I always think I’m proud of it. As I’m singing the melody, I’m thinking, ‘That’s a good melody. That’s a really good melody.’ Or, ‘That’s a good lyric I just sang.’”

Bassist Nick Ghanbarian added, “It’s kind of like, even though we don’t play it — we’ve probably only played it less than 20 times onstage in the last 10 years — it’s kind of like an anthem for us. More so than an anthem, it’s a mission statement. It’s a cool song and people seem to like it, so maybe we’ll play it more.”

At the end of the interview, Raneri had some advice to give to aspiring young musicians: “I always tell young bands concentrate on the music. If you’re trying to get your band somewhere, if you spend one hour of the day playing music and the other 23 trying to promote your music, then you’re doing it wrong.”

During the interview Bayside also talked about what makes Riot Fest such a great festival, playing after-party shows and the difference between club and festival settings. Watch the full interview below.