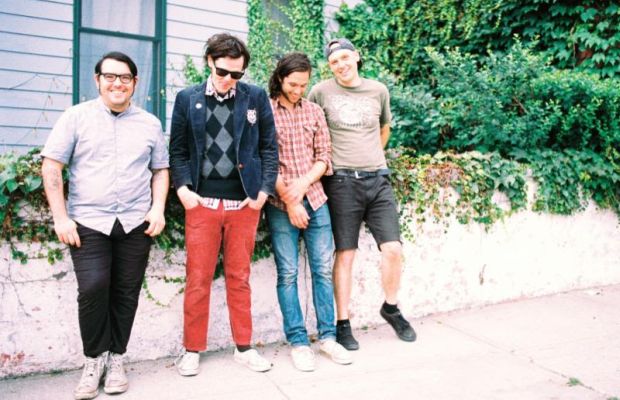 The past 24 hours have not been the best for Philadelphia’s Beach Slang. After a less-than-desirable show last night in Salt Lake City, social media was rampant with rumors of an impending breakup.

According to various online comments, frontman James Alex repeatedly told the crowd that the set would be their last. After ending the gig early, he told the crowd their ticket money should be refunded.

The band’s social media accounts were silent until earlier this evening, when Alex shared a statement on the band’s official Facebook page.

He revealed that after he walked off stage last night, he believed Beach Slang were no more. It wasn't until he ran into a fan on the way back to his hotel, however, that he changed his mind.

“After I left the stage in Salt Lake, thinking I was ending Beach Slang,” he wrote, “I was walking down the street, back to the hotel, when a girl from the show ran up to me, hugged me so sincerely, and said, ‘Don’t do this. We need you.’”

Read more: What is punk? This new infographic can tell you

While they have canceled their show tonight in Boise, Idaho, Beach Slang are planning to resume their current tour tomorrow night in Seattle, Washington.

“'Westerberg was playing his favorite guitar […]. Suddenly, he grabbed it by the body and slammed the neck down on the amplifier and splintered it completely. Afterwards, soundman Brendan McCabe approached him in shock: ‘Paul what the hell did you do that for. How could you wreck that guitar? You loved that thing.’ ‘Well that’s the difference between me and you Brendan,’ he told him. 'You cherish things you love. Me? I destroy them.’

The first time I read this part of Trouble Boys, I thought, 'Fuck, maybe there’s really something to that. Maybe there’s romanticism in destroying the things you love.' Or maybe I'm just a messed up kid who thinks he never deserved any of this. I don't know. After I left the stage in Salt Lake, thinking I was ending Beach Slang, I was walking down the street, back to the hotel, when a girl from the show ran up to me, hugged me so sincerely, and said, 'Don’t do this. We need you.' Straight away, I realized I was wrong. There is nothing sweet, there is no light, and there is nothing romantic when the thing you love is broken.

Salt Lake, for the car crash last night and Boise, for fumbling on you, I am gigantically sorry—even bigger than that. I am going to make good on making it up to you. Cross my heart.

This, and all of you, mean too much to me. I love you with thunder. I love you all the way.

So, yeah, Seattle, we are still coming to your good city, wild-eyed and ready, our hearts bashed back into shape.

If you’re still in, we are.

For us—all of us,
James Alex”