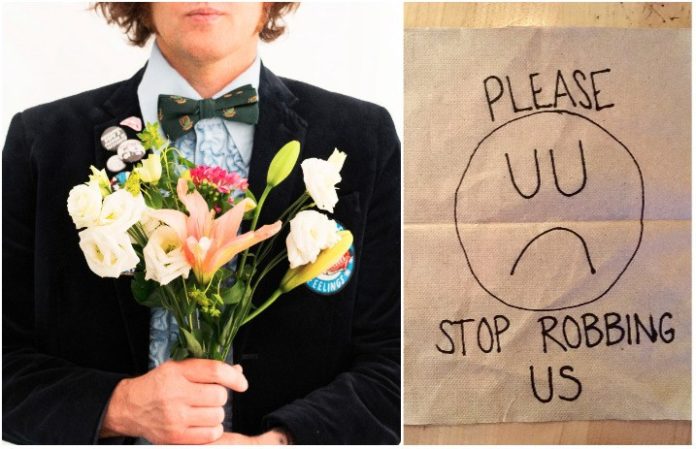 Beach Slang have posted a Twitter update about their van, trailer and gear being stolen while on tour in Seattle—read it directly below. The band note that, while they're not canceling any upcoming shows, those who wish to help can donate via PayPal to [email protected]. See the original story of the theft and view the band's upcoming tour dates after the tweet.

Beach Slang are facing an unexpected setback during their current U.S. tour: Yesterday, the band reported that their van and trailer were stolen. However, the group say they will continue with their scheduled shows. Read more below.

As covered by BrooklynVegan, Beach Slang's touring van, including all of their musical gear and band merchandise, was stolen in Seattle. On Sunday, the band posted a photo to Twitter of a sad face drawing with the inscription, “Please stop robbing us”—see the tweet below. Beach Slang faced an earlier theft when, last November, items were stolen from their van in Austin, Texas.

“Our van and trailer were stolen last night,” the band noted in their determined tweet. “All of our gear, all of our merch, but none of our charge. It's a pretty beautiful thing to be surrounded by people who refuse to be broken.”

All of our gear, all of our merch, but none of our charge. It’s a pretty beautiful thing to be surrounded by people who refuse to be broken. Portland, we’ll see you tonight ����❤️ pic.twitter.com/BThiNsn5Jg

Watch more: Citizen reveal the inspiration behind their album artwork