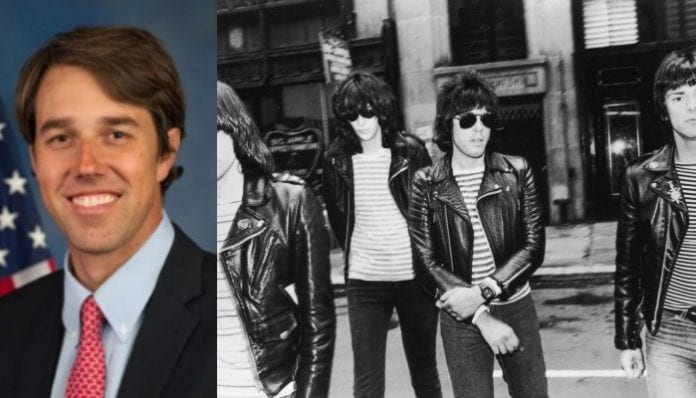 Beto O’Rourke is a punk-rock politician. He loves skateboarding, rock music and has a DIY attitude.

Now, there is footage of the former democratic congressman from El Paso jamming on stage to “Blitzkrieg Bop” by the Ramones in a onesie and a sheep mask. Yes, you read that right.

Read more: Everything coming to and leaving Netflix in February

Mother Jones has released the footage of O’Rourke performing with his punk-rock cover band called The Sheeps. They wore disguises on stage, such as the onsies and sheep masks.

The band only played three shows around El Paso between 2003 and 2004 and never toured, but the footage is here forever. The particular video is from 2003 at a show in El Paso’s Moontime Pizza. Beto was the guitarist in the band.

Check out the amazing video below.

The Sheeps isn’t the only band O’Rourke was a part of. He was in a hardcore group called Foss with At The Drive In’s Cedric Bixler-Zavala.

O’Rourke is reportedly contemplating a run for U.S. president. In the 2018 Senate race, Republican Sen. Ted Cruz beat out O’Rourke for the Senate seat. O’Rourke gained huge popularity for his liberal ideas and DIY style of campaigning.

During one campaign stop, O’Rourke even performed on stage with Willie Nelson. He also filmed himself playing air drums on the steering wheel during road trips and even brought a fog machine to his concession speech.

The GOP attempted to smear O’Rourke for his punk rock lifestyle back in August. They tweeted photos of him skateboarding in an attempt to discredit him and secure Cruz’s lead. However, it was a confused attack and didn’t necessarily make O’Rourke’s supporters second-guess their candidate.

The photo came from a screenshot of this viral video of O’Rourke skateboarding in a Whataburger parking lot, of which we are big fans of.