Billie Eilish‘s music is far from metal, even if she copped the genre’s style for a beanie in a recent merch line, but now she’s getting a heavy treatment for her James Bond song “No Time To Die.”

The band In Virtue took a stab at re-recording the song with a heavy-handed metal touch added across the song.

This isn’t the first time a metal band has covered Billie Eilish though. Early last year, YouTuber Nik Nocturnal and Lauren Babic teamed up to create a metal cover of Eilish’s “bury a friend.”

Eilish gave a little nod back to the metal community with a beanie featuring a death metal style font for her logo. 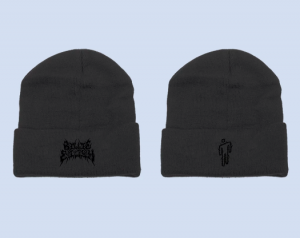 Now, Eilish is getting the metal treatment once again for her James Bond theme. The revamped version features some heavy shredding, crooning vocals and rapid-fire drum work.

You can check out In Virtue’s cover of the track below.

Eilish gave her take on the next James Bond theme song in the middle of February.

Eilish is also the youngest musician to ever record the James Bond theme song, joining the ranks of others who have handled the task including Madonna, Chris Cornell, Adele and others.

The song begins at just a whisper and slowly builds the tension, stretching it tighter and tighter until it inevitably snaps into a massive crescendo. Go ahead, put this song on and look out your window. Check out the original below.

What do you think of this metal cover of Billie Eilish’s James Bond theme? Let us know your thoughts in the comments below.