'No Time To Die' releases April 8.

Chances are looking good that Billie Eilish will record the James Bond title song for the upcoming film No Time To Die. The news initially came from a fan site but Eilish seems to have all but confirmed the rumors to be true.

If Billie Eilish is recording the theme, she will be the youngest in a long line of greats. It’s an exclusive club that features Madonna, Chris Cornell, Adele and others.

At just 18 years old, Billie Eilish would make history as the youngest person to record the title song for a James Bond film.

No Time To Die is set to release this year and stars Rami Malek and Daniel Craig opposite one another. Malek had previously spoken about how Queen‘s Freddie Mercury helped influence his portrayal and creation of his villainous Safin.

“I’m beyond excited that Hans is scoring #NoTimeToDie,” Fukunaga says. “The music of Bond has always been iconic and I’ve already witnessed Hans adding his touch of genius to the Bond legacy.”

Next, we get to the Billie Eilish rumors. Fansite MI6 first speculated and reported that Billie Eilish would be recording the title song for the 25th James Bond film. Additionally, Eilish now seems to have fueled the rumors with her recent Instagram stories.

The 18-year old musician posted images of the iconic Bond girls throughout history onto her Instagram story. Check them out below.

Billie Eilish has seemingly confirmed the rumors that she will be performing the official theme song of the latest Bond movie #NoTimeToDie after she shared photos of the Bond Girls on her Instagram Story. pic.twitter.com/MmGoaOa0yk

Is this Billie Eilish confirming the rumors to be true? Or, is she just teasing fans? We’ll find out soon enough as No Time To Die is set to release April 8.

The official James Bond Twitter account has confirmed Eilish will perform the title tarck of the upcoming No Time To Die film.

“The #NoTimeToDie title song will be performed by @billieeilish” the account shared. “Billie has written the song with her brother @finneas and is the youngest artist in history to write and record a James Bond theme song.”

The #NoTimeToDie title song will be performed by @billieeilish. Billie has written the song with her brother @finneas and is the youngest artist in history to write and record a James Bond theme song. pic.twitter.com/Qd5cYIRlmg

Eilish reacted to the news on Instagram, writing, “SO UNREAL.” 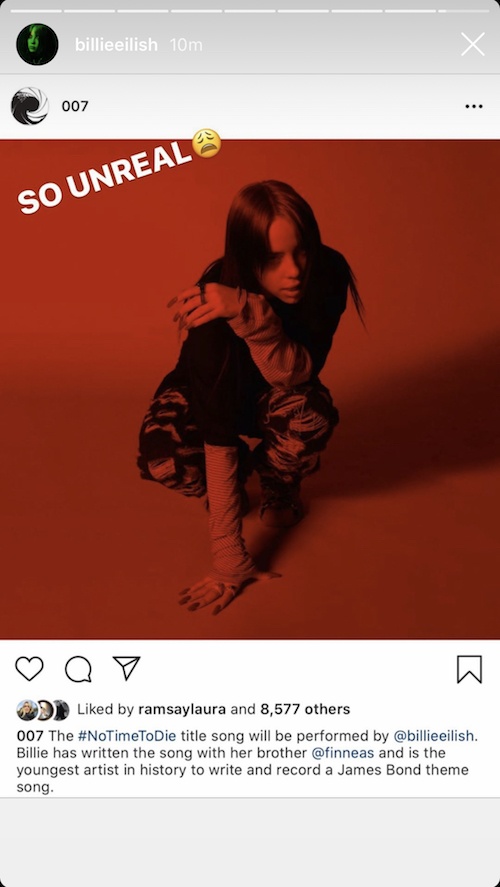 No further information regarding its release date have been revealed at this time.

Are you excited to hear Billie Eilish perform the No Time To Die title track? Let us know in the comments below.