Billie Eilish has denied rumors of an upcoming album, but teased fans that something is coming.

It seems as though the singer might release a collab with Justin Bieber.

To fill you in, rumors have been circulating that Eilish is dropping another album. This makes sense, considering she literally just dropped her debut album When We All Fall Asleep, Where Do We Go? She took to Instagram stories to shut that down, but tease that something was happening. 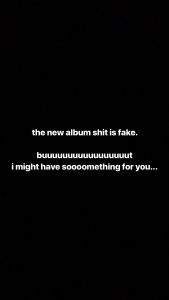 Then, she posted some lyrics to her song “all the good girls go to hell” followed by a post with some hand-over-mouth emojis and “ok goodnight.” 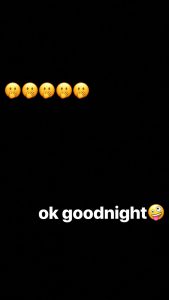 Read more: 20 pop songs that should be covered for a new ‘Punk Goes’ album from Justin Bieber to Ariana Grande

To fuel the flame, Bieber just tweeted “Remix” which was retweeted by Eilish’s brother and collaborator FINNEAS.

This leads many people to believe Bieber will be remixing the song, or her other popular track “bad guy.”

You can see what they had to say on Twitter about it below.

Read more: Billie Eilish admired by Radiohead frontman for “doing her own thing”

But is it, Bad Guy remix or All The Good Girls Go to Hell remix?

I cannot wait to find out. pic.twitter.com/WRmeyVGkzc

what if billie eilish x justin bieber, what do yall think ? pic.twitter.com/rDKp57uwIi

If this is true, it’s probably big for Eilish considering her love for the artist. When she appeared on Ellen, Eilish talked about how she’s a huge Bieber fan and how he just started following her on Instagram.

Read more: 10 musicians who could double as Marvel characters from Billie Eilish to Juliet Simms

Eilish just added more dates to her fall tour. You can see her full list of tour dates below.

Billie Eilish has finally responded to being objectified after a photo of her wearing a tank top went viral.

The 17-year-old star is known for her very baggy clothing.

“I never want the world to know everything about me. I mean that’s why I wear big baggy clothes,” she said. “Nobody can have an opinion because they haven’t seen what’s underneath.”

You can see the video of her explaining her style below.

Then, she was photographed wearing a white fitted tank top under a baggy sweatshirt. The attire differed from her usual baggy clothes, sparking tweets that sexualized Eilish’s appearance.

When people began objectifying Eilish after photos surfaced of her in a fitted tank top, fans immediately came to her defense. Now, she’s finally responded to the viral photo with a meme followed by a video of herself laughing on her Instagram story.

She first posted a meme that talks about pedophilia and how it’s normalized when talking about herself wearing a tank top. She followed it with a video of herself laughing out loud.

Also amidst the photo surfacing, she spoke up in a recent interview with Vogue Australia to further discuss her outfit choices.

“What I like about just dressing like I’m 800 sizes bigger than I am is it kind of gives nobody the opportunity to judge what your body looks like,” Eilish said. “I don’t want to give anyone the excuse of judging, and not—and it’s not like everyone’s going to judge you, but they all do in their head, like even if they’re not trying to.”

In the interview, Eilish also explained being inspired by Rihanna’s fashion.

“I remember seeing an acceptance speech Rihanna gave where she said fashion has always been her defense mechanism,” Eilish said. “And I felt like I never felt something as strongly hearing someone else say it than I did when I heard her say that because it’s always been that way for me. It’s always been my security blanket.”

You can watch the full video below.

What do you think of a possible Billie Eilish and Justin Bieber collab? Sound off in the comments down below!