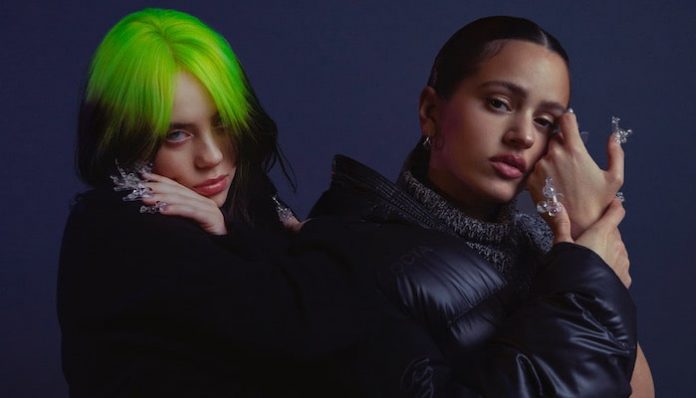 On Thursday, the duo unleashed a haunting video for the new single ahead of its feature in a new episode of Euphoria.

Billie Eilish first revealed that she had a collab with Rosalía in the works all the way back in 2019. Although she didn’t spill too many details to Annie Mac, Eilish did share that working with Rosalía was a great experience.

“She knows what she wants, it’s very refreshing,” she said. “I was like, ‘Wow, you’re the only person I’ve met who’s really like this.’ She’s the nicest girl, oh my god.”

As it turns out, the duo wrote the majority of the song in January of 2019. During a recent interview with Zane Lowe for Apple Music, Eilish revealed why they decided to sing “Lo Vas A Olvidar” mostly in Spanish.

“I mean, this is the longest lead up on earth. Well, because we wrote most of the song in January of 2019,” she says. “I actually think it’s so beautiful, and it’s so not something I feel like I’ve done. Rosalia opened a little channel in me that I hadn’t tried out before. A lot of it is in Spanish, which I think is so important. I remember when we were writing the song, I remember her saying something about, ‘It should be in English.’ And I was like, ‘No, no, no. It should be in Spanish. It’s so beautiful.’

Eilish goes on to say that a lot of music she loves isn’t in English. So, this song was a great opportunity for her to collaborate on something she’s never done before.

“I’ve always loved music that isn’t in English,” she continues. “I like tons of music from languages I don’t even speak. I’ve been really intrigued by it pretty much my whole life. There are so many Russian songs I like and Spanish and French and… so that was the biggest thing for this one. And she told me what the lyrics mean, and then it just meant even more. I was like, ‘That’s beautiful, the delivery is beautiful and the emotion is beautiful.'”

Now, “Lo Vas A Olvidar,” which translates to “you will forget it,” has finally arrived. On Thursday, Eilish and Rosalía unveiled a moody new video for the single that evokes the same emotions felt throughout the moving collaboration.

Read more: MGK, YUNGBLUD and Travis Barker fight off zombies in “acting like that”

“Lo Vas A Olvidar” marks the first new music to arrive from Eilish in 2021. Last year, she released a carefree video for “Therefore I Am” which followed up “No Time To Die” and “my future.”

Her collab with Rosalía is kickstarting what potentially could be a big year for Eilish. In December, Eilish seemingly confirmed that her next musical era is officially on the way. As well, her upcoming documentary The World’s A Little Blurry is set to arrive on Feb. 26. Last month, viewers got their first look at what they can expect from the documentary in its first trailer.

Eilish spent a good portion of 2020 working on her next album with her brother FINNEAS. She previously revealed that she has no plans to release the LP during the coronavirus pandemic. However, she did share that fans shouldn’t expect to hear any songs about the COVID-19 crisis on the new album.

“It’s not like we’re making songs about quarantine, we’re just in a different mindset than we would be otherwise,” she said. “And that’s just how everything is. It’s the butterfly effect, it’s like if you hadn’t done this three years ago, maybe you wouldn’t be doing this three years later. It’s just the way that it is. At the same time, this is the most time off I’ve ever had in my life, first of all. And especially since this all started like five years ago.”

Read more: Glastonbury Festival isn’t happening in 2021 after all

Although her next album doesn’t have a release date yet, Eilish is looking forward to fans finally hearing it when the time is right.

“I’m really, really happy that we’ve been able to make the things that we’re making,” she said. “And I can’t wait for you to hear this shit. I can’t wait to have the world hear. I’m very excited and hopeful for the future.”

Billie Eilish’s interview with Zane Lowe for Apple Music is available to stream below.

What are your reactions to Billie Eilish’s collab with Rosalía? Let us know in the comments below.