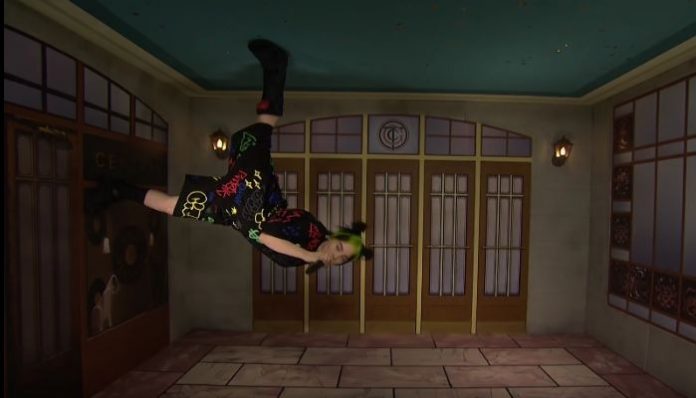 Billie Eilish has explained how she pulled off her gravity-defying performance on Saturday Night Live over the weekend.

In case you missed it, Eilish helped kick off the 45th season by performing on the late-night show for the very first time.

The episode, hosted by Woody Harrelson, saw the artist performing her hits “bad guy” and “i love you.”

Kicking things off with “bad guy,” Eilish performed inside of a rotating set that made it appear as if she was walking up the walls and across the ceiling.

You can check out the incredible performance below!

Now, Eilish has explained how she pulled it off. She said for this song, she was in a box that looked like the real SNL stage.

“And, you know, I started walking on the walls,” she said. “Basically it was inspired by this scene from Royal Wedding with Fred Astaire where he walks on all the walls of the ceiling.”

She explained her vision for the performance to her team by replicating it with a tissue box so they could perfect the timing of everything.

“Pretty much everyone I know was excited about it,” Eilish said. “We have had more rehearsal time than any other thing we’ve done.”

You can see the entire process come together for how her “bad guy” performance came to be below.

How did @billieeilish do that?! 🤯

Also on the show, she returned later to strip things down with an acoustic version of “i love you” with her brother Finneas.

You can view that performance below.

Billie Eilish recently announced the dates for her WHERE DO WE GO? world tour, which she plans to make super eco-friendly.

Eilish is touring in support of her record-breaking debut album WHEN WE ALL FALL ASLEEP, WHERE DO WE GO?

The tour starts in March and will continue through July as she treks from North America to Latin and South America and then across the pond to Europe and the United Kingdom. She’s teamed up with non-profit organization REVERB to support pressing environmental and social issues worldwide.

For tickets and information regarding the ‘WHERE DO WE GO?’ world tour head here. A full list of tour dates and locations is below.

What do you think of Billie Eilish breaking down her insane performance over the weekend? Sound off in the comments down below!