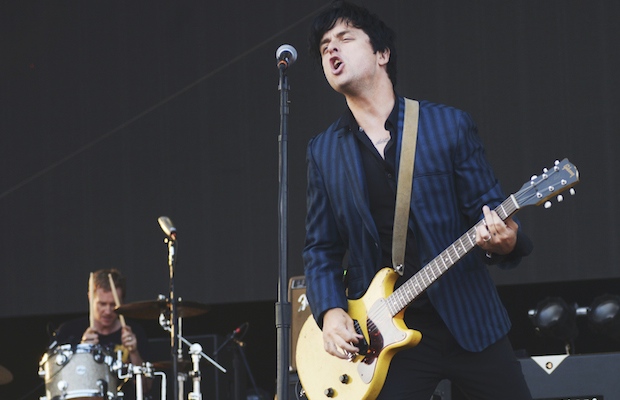 Armstrong first performed with the group at the second weekend of Coachella back in April, when 'Mats frontman Paul Westerberg fell victim to back trouble and was forced to perform sitting down, then returned in May to once again help fill out the lineup at Atlanta's Shaky Knees.

If last night's Forecastle is any indication, Billie Joe's residency appears to be ongoing, at least for the time being, and we were there to witness the epic pairing in action.

The Replacements made no special mention or acknowledgement of Armstrong, simply treating him as just another member of the band. It's entirely possible that many festival goers were unaware of who the striped jacket clad, jet black haired guitarist actually was. Billie Joe seemed to relish in this relative anonymity, grinning from ear to ear at another opportunity to perform with the reunited rockers.

While their set, the group's first in two months, had its share of sloppy moments and false starts, a fact readily pointed out and mocked by bassist and founding member Tommy Stinson, as well as guitar smashing antics, Armstrong's enthusiasm coupled with the unwavering momentum provided by current drummer Josh Freese, helped bind the songs together and keep things afloat.

The mistakes were minor compared to the set's high points, however, and the energy level was astonishing for a band now in its 35th year of existence (minus a two decade or so break). Standing at a generous 23 songs, The Replacements' set was packed with fan favorites and career-spanning classics, complete with standouts “I'm In Trouble,” “Left Of The Dial,” and “Bastards Of Young.”

Here's a list of songs performed last night, via Setlist.fm:

And, below, you'll find a full list of upcoming Replacements dates. Whether or not they will feature Billie Joe remains to be seen.

Not pictured is Dave Minehan, who has played guitar for the group since their Riot Fest reunion last fall.