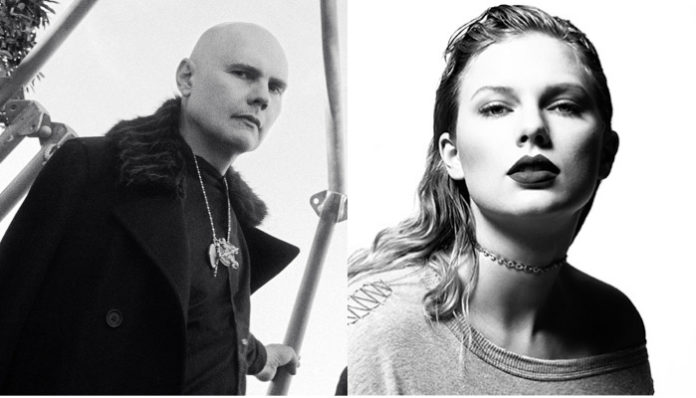 Over the course of two Instagram posts, Corgan rebuffs any paternal ties to Swift before delving into a deep rumination on identity. At one point, the musician says the person known as Billy Corgan is merely a construct of his own creation.

“There is NO such person as ‘Billy Corgan,'” he writes, as noted by SPIN. “He (BC) does not exist. Or, if he does exist (per these times), he is a creation from my mind to yours, and no different than a cartoon drawing of Batman or Sponge Bob.”

The Pumpkins recently released comeback single “Solara” (after reuniting with three of the band’s four original members) and they’re out on the Shiny And Oh So Bright Tour right now. Below, read Corgan’s posts and see the upcoming tour dates.

You have to love the Internets. Seems this is a new meme going around (someone sent this to me) where I guess the question is(?): Is T Swift my child. Hmm… I’ll take the compliment of the comparison here despite the fact that I guess the jokes on me? (and not the lovely and talented Miss Swift) Which becomes a good starting point back into where I left off last time; on notions of image/self-esteem/God/and self-love. But before I do let me express how I continue to be blown away by the number of messages I am receiving regarding these issues. There simply is no end to how many are struggling, and it seems to have some connection to this modern or Digital Age culture we are living in. Where what’s real is just as relevant, or so it appears, as to what is constructed, fake or false. Where a real you must negotiate time-space next to the more shiny or dark social media avatar of you, and so on and so forth up the food chain of governments and endless celebrity. Each tier of human life augmented to the point where what you no longer know what, or whom, to believe in; including God. And for those new to the game, it is easiest for me to speak of my own experience. So please consider that I do so as illustration. Take from it as you will… There is NO such person as ‘Billy Corgan’. He (BC) does not exist. Or, if he does exist (per these times), he is a creation from my mind to yours, and no different than a cartoon drawing of Batman or Sponge Bob. Trace the route: from 1967 to 1985 I was Bill Corgan, born WPC. My father was known to us as Billy, so he does exist, but the ‘Billy’ I speak of, the one who made records with SP and appeared on chat shows, was a creation. And I still remember the day around age 18 when I told someone, ‘don’t call me Bill anymore. I am Billy now…’ Now why would I do such a thing? Because Bill, or Little Bill as I was known to the family, was beaten, harassed, broken and discarded over so many years, and in so many separate instances (let’s say the number of disassociative events is in the thousands) that he (Bill) was WORTHLESS to me. But Billy Corgan, a construct of my own making, with a different walk, haircut, and…end pt 1

PT 2 (cont) But Billy Corgan, a construct of my own making, with a different walk, haircut, and even eyes that I purposely changed (from fully open to ovals half closed, like those of a snake), he was a new being around which I could invent any story as I pleased. And look no further than Bob Dylan’s transformation from Robert Zimmerman (albeit for different reasons) as example. Like him, I simply invented myself anew. The why and wherefore is simple: A/ he was better than I, and certainly more interesting, and capable in ways I couldn’t have dreamt of even months before while I was still in school… And B/ when things went wrong, or I misstepped,, it was ‘his’ fault and not mine. Billy being a shield against all that ails me in the world. Consider this: as much as I’ve spoken of my childhood, I’ve yet to tell the real story. And if I was using that childhood to market my records (as BC was often accused of during the early 90’s), would I have not told a worse story for sympathy, rather than an abridged one that spoke of where BC had mythically come from (and which also in foreshadowing spoke of where he planned to go). If this sounds confusing, note, it was to me as well, and to those around me. My parents questioned what I was up to, as they generally did not know Billy Corgan, this avatar. But they certainly knew Bill, and were quite comfortable pitting their invented stories against my very real one (and if they weren’t, than the abuse could never have occurred). To those that have been harmed so, you know exactly what I’m speaking of here. And it was certainly confusing to the band, who on a day to day basis dealt with WPC, and not Billy Corgan. Although you could argue that the more I played at this character, the more I became him; like an actor who’s been in a role so long (William Shatner as Captain Kirk) that he assumes the attributes of said character cause it’s just easier that reminding anyone there might be a difference. So last thing for today, and it’s something I told the NY Times (in a thought I believe that was not printed): -You can keep Billy Corgan, he is dead, and he’s there for you to mock and use as you wish-