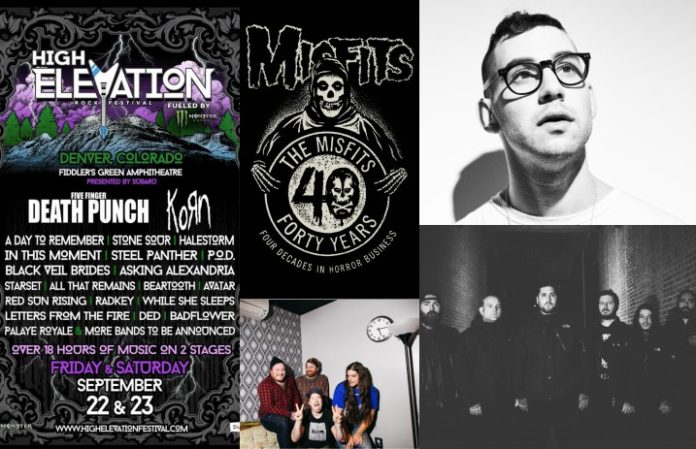 Today we have a ton of news for you! Tours from Fit For An Autopsy and Thin Lips— plus the Misfits have announced a collaboration with Obey Giant! Check out the news you might have missed today below!

Read More: Set It Off release high-energy video for “Hyponotized” and other news you might have missed today

1. This year's High Elevation Festival will feature Korn, A Day To Remember and a lot more!

Other notable acts that will be performing are Black Veil Brides, Beartooth, While She Sleeps, and Palaye Royale. Additional acts are expected to be added in the coming months.

The new song comes from the group's upcoming album Gone Now, which will be released later this year on June 2.

Check out Bleachers' quirky and animated live performance on Kimmel below!

3. Fit For An Autopsy have revealed new summer tour dates!

Fresh off the release of their new album The Great Collapse, Fit For An Autopsy have announced new summer tour dates.

The deathcore group will be taking Tombs and Moon Tooth on the road with them. They're scheduled to play 20 dates in June and July.

Check out the official tour poster, as well as the full list of stops below.

4. Royal Blood have also announced a North American tour in support of their sophmore record!

Royal Blood are set to release their follow-up record How Did We Get So Dark? on June 16, and they'll be touring all summer long.

Today, they've newly announced a bunch of dates around their North American festival appearances at events like Governor's Ball, Bonnaroo and Lollapalooza.

The new dates are sprinkled between June and August, as the English band will also be extensively touring Europe in addition to Australia and Japan.

5. Another one! Thin Lips will also be heading out on the road this spring!

Thin Lips have announced they'll be touring the East coast this May, and they'll be joined by Museum Mouth, Great Cynics, and Signals Midwest.

The group is touring in support of their 2016 debut Riff Hard, which was released on Lame-O Records.

Check out the full list of dates, both hand-drawn by the group and fully listed underneath.

As a newly honorary member of the Rock And Roll Hall Of Fame, the Misfits are celebrating their 40th anniversary with a brand new logo that you can see below, as well as a new fashion line collaboration!

You can also read an extensive interview that the punk legends conducted with the Rock Hall where they comment on the anniversary and a whole lot more here.

The Misfits first live performance took place on April 18, 1977 at CBGB in NYC, and to celebrate they've teamed up with Shepard Fairey of Obey Giant to design special limited edition t-shirts. You can view and purchase these items here.

Bassist and founding member Jerry Only commented on the Misfits milestone and legacy:

A famous quote once foretold, “Nothing is stronger than an idea whose time has come”. That statement sums up this situation at its core. The Misfits were so far ahead of their time when we began back in 1977, that it took the world 40 years to catch up. Survival is the challenge…some creations wither and die, destined for extinction, while others endure the test of time. There are rare exceptions when something takes root and grows slowly, beneath the surface, until it eventually takes over. That time has come, and that time is NOW…

I'd like to thank all the FIENDS for 40 years and four generations of horror business. There's more to come…

7. Soldiers Of A Wrong War are streaming their new album now!

Hailing from Vercelli, Italy, Soldiers Of A Wrong War are offering you the chance to listen to their sophmore album in full on SoundCloud!

Countdowns is available today, and the alternative rockers are back with their first record since their self-funded debut which was released in 2011.

“I think that people will immediately feel that the sound of this album is more mature, we had the chance to grow, to experience some changes in our lives and we started to listen to many different types of music, having the chance to absorb something from every new artist we fell in love with,” a statement from the band reads.

A very special limited edition of Protest The Hero's 2005 record Kezia is available for purchase, and features plenty of cool exclusive items.

Announced in a Facebook video which you can see below, an unpacking of the box set shows lithographs, posters, trading cards and more.

Only a limited amount will be avaialble, and they're expected to begin shipping later this week! Purchase yours here!

9. Check out Our Last Night covering Ed Sheeran's “Shape Of You.”

A second Ed Sheeran cover has been made available this week, and this time it's brought to you by Our Last Night!

Listen to their rendition of “Shape Of You” below, and let us know what you think of it in the comments below!

This young group is scheduled to release their debut EP this Friday, and it's called Black Smoke Rising, via Lava/Republic Records and William Morris Endeavor.

Coming out of Frankenmuth, MI, the band features members who are all in between the ages of 18 and 21, and two of them will even be skipping out on their high school prom to go on tour this spring with the Struts. Check out the dates under the video.

You can watch the music video for their first single titled “Highway Tune” off of their upcoming EP below! They are sure to be an act to keep an eye on in the future.