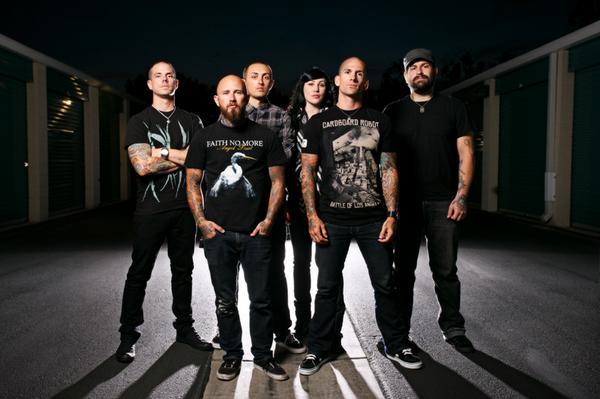 After a 14-year run, Orange County metalcore sextet Bleeding Through have called it a day. Their seventh and final studio album, the Great Fire, was released on Rise Records in 2011. Vocalist Brandan Schieppati posted a lengthy break up statement on his blog, which can be read below.

“Today is indeed a sad day for me. When you have some success doing something that you love you never really think about writing a statement about that something coming to an end. Well that dream that we have had as Bleeding Through has come to an end.

I think I can speak for the rest of my bandmates in saying that we always hoped it would end on our terms and it has.

We have been fortunate to have a strong fan base worldwide and have brought joy to many and pissed off many more. BT was always a band that wore the emotion of the music on our sleeves. We cared about everyone like family that ever took the time to listen to our band, support our merchandise and go to our shows.

Since 1999 we have been blessed to be able to tour the world, record seven records with some great musical minds, tour with amazing bands and people,  work with people with character such as management, booking agents and road crew.

Most importantly, we made lasting friends from this journey. We have been honored to be part of a expanding the musical movement of heavy music and hope to be remembered as a benchmark and pioneer of a specific style of music.

We have been a band since 1999 and many of us just had life catch up with us in the way of marriages, kids, businesses and other endeavors. We can no longer dedicate what we need to to keep BT going.

Personally I feel doing this band in a part time fashion is not what this band is about and and feel like we have always been an all or nothing band. With that being said and because we have established a world wide following over the last 14 years we want to give us and those people one more chance to share in this music together. We are setting up farewell tours. Dates will be up and promoted very soon.

To those who supported this band: It has been an honor.”

The band are touring Europe in April, and have posted another update regarding final shows elsewhere:

“just so everyone knows we intend to play farewell shows all over the world so hope to see everyone at those shows. If you want to see us tell your local promoters to email us. Lets do this one more time!”