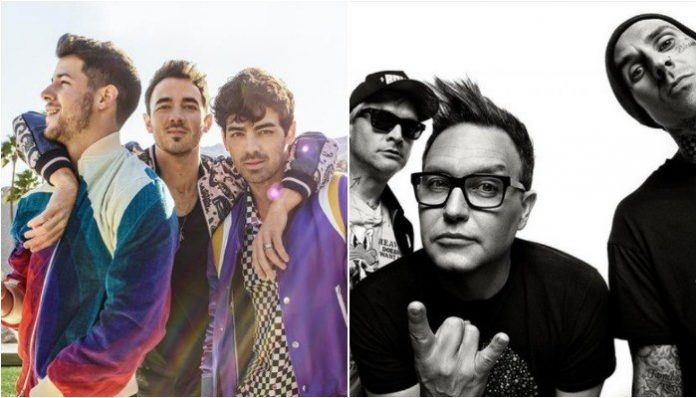 Kevin Jonas poked fun at his own band, the Jonas Brothers, when he joined in on a trend that’s making its way through Twitter with his own blink-182-inspired meme.

This isn’t the first time the JoBros and the scene have crossed paths in recent weeks. Who can forget Joe Jonas’ infamous My Chemical Romance rehearsal theory. And it was revealed on social media that he and his brother/bandmate Joe Jonas were seen jamming to All Time Low on tour.

User Emily Sanchez posted her realization on Twitter when she saw that seven weeks ago, Joe posted on an Instagram moment where he was across from a screen that had All Time Low’s So Wrong It’s Right cover on it. “Shameless” is also playing.

Today I have made an amazing discovery. While looking at Joe Jonas’ tour highlights on Instagram I noticed in one of the videos that the Jo Bro’s were listening to All Time Low and my two favorite bands have now collided pic.twitter.com/skHG7SkdCa

Now, instead of Joe, it’s Kevin.

It starts with a new meme that’s been making its rounds on Twitter in the past week. Users post photos with the caption beginning “Gonna tell my kids this is…” Some of the posts with the JoBros are actually pretty hilarious.

Gonna tell my kids this was sleeping with sirens pic.twitter.com/9MfgUMuH20

Gonna tell my kids this was Motley Crue pic.twitter.com/Ea6qfRNJtq

Gonna tell my kids this was Bring me the horizon pic.twitter.com/sMIHR5jtqj

Kevin joined in on the meme tweeting a photo of his group and saying they were blink-182.

Gonna tell my kids this was Blink-182 pic.twitter.com/goy83IJr59

The punk band responded to the pop singer with the iconic lyrics from “What’s My Age Again?”

nobody likes you when you’re 23

If you add all that into the fact that Nick Jonas got arrested at a Fall Out Boy concert, there’s no denying that the Jonas Brothers are actually pop-punk.

The holidays are quickly approaching, and Travis Barker and the rest of blink-182 apparently have quite the gift for their fans. The drummer revealed in a new interview that the band have recorded a new Christmas song.

In an interview with Hannah Stocking, Barker and his daughter Alabama were playing a friendly game of Jenga when he was asked the question “What artists are you listening to right now?”

Nothing has been announced officially, but we’ll be anxiously awaiting the tracks debut.

More on Kevin and the Jonas Brothers

If you’re still not convinced the brothers aren’t emo enough, Kevin Jonas revealed in an episode of Hot Ones that the band did indeed go through a scene phase.

Host Sean Evans asks the JoBros what they remember about their “short-lived punk-rock phase.”

Nick jokes it was “epic” to which Kevin followed up with “so extreme.” However, Kevin went on to elaborate a bit more.

“We were like scene kids from Jersey at one point. We were going to see MxPx and Slick Shoes, you know, all of those bands—punching people in the face in the mosh pit. That kind of thing.”

“Kevin did a backflip in a mosh pit twice,” Joe adds. “And hit the same guy in the nuts twice. I watched Kevin, and I’m like, ‘He’s going to get beat up.’ Now, this guy has every right to fight him. The guy was still like, you know in a mosh, they’re like, ‘It’s all good.’ I’m like, Kevin deserves to get his ass kicked right now.”

What do you think of Kevin’s tweet to blink-182? Let us know in the comments below!