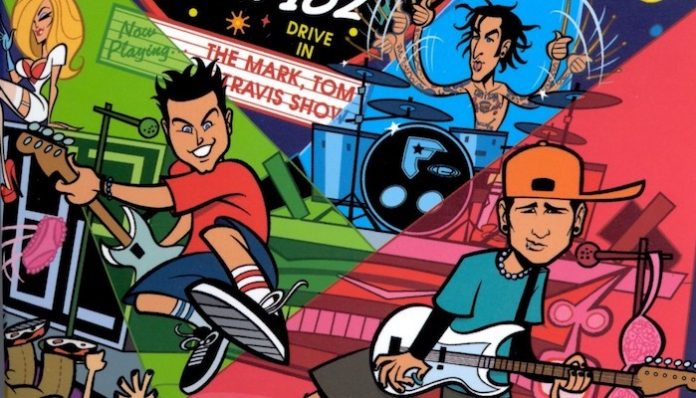 blink-182 live album The Mark, Tom and Travis Show (The Enema Strikes Back!) is finally available to stream again in certain regions.

Recorded in California in 1999, the album includes material from the pop-punk trio’s first three albums: Cheshire Cat, Dude Ranch, and Enema Of The State. This live album became an instant fan-favorite with added stage banter between Mark Hoppus and Tom DeLonge tossed in the mix.

Read more: All Time Low to stream ‘Nothing Personal’ documentary one day early

After mysteriously disappearing from streaming sites two years ago, fans (including Man Overboard’s Zac Eisenstein) took to Twitter to question and plea for the return of their favorite comedic live album.

The Mark, Tom, and Travis show is not on spotify and that really grinds my gears and ticks me off.

will we ever get "The Mark, Tom, and Travis show" on streaming platforms?

Following its return, almost nineteen years to the day of its debut, fans are taking to Twitter (again) to share their love.

why did no one tell me they put the mark, tom and travis show on spotify???

Now that the mark, tom and travis show is back we need @markhoppus to bring back satan

If your region has the album, you can check out The Mark, Tom, and Travis Show on Spotify below.

Earlier this year, blink-182 embarked on a cross-country tour with Lil Wayne. The unlikely pair experienced their fair share of drama, from the rapper walking off stage to him canceling a show following police involvement at his hotel. The band addressed the night he walked off the stage in a recent interview with KROQ.

When asked, “How much of a nightmare was Lil Wayne?” the band immediately jumped to the rapper’s defense. “He was awesome,” Hoppus replies. “He was awesome, his band was amazing, his whole crew, everybody. It was so fun all summer long.”

“The one day where he walked off stage, he had said, ‘I just felt like they didn’t like me,’ so he walked off stage…” Travis Barker added. “‘I didn’t want to put them through it. I just wanted you guys to be able to get on and do your thing.’”

The most controversial aspect though, might have been the “A Milli” and “What’s My Age Again?” mashup that had fans equally excited as confused. Originally released as a teaser for their joint tour, the mashup just recently hit streaming.

blink-182 released their newest album, NINE, in late September, marking their second album with guitarist/vocalist Matt Skiba. It debuted at No. 3 on the Billboard 200 and was met with positivity from music critics across the board.

The first single, “Blame It On My Youth,” could be heard on any music station for weeks on end. Check it out below and all of NINE here.

What’s your favorite moment off The Mark, Tom, and Travis Show? Let us know in the comments below.