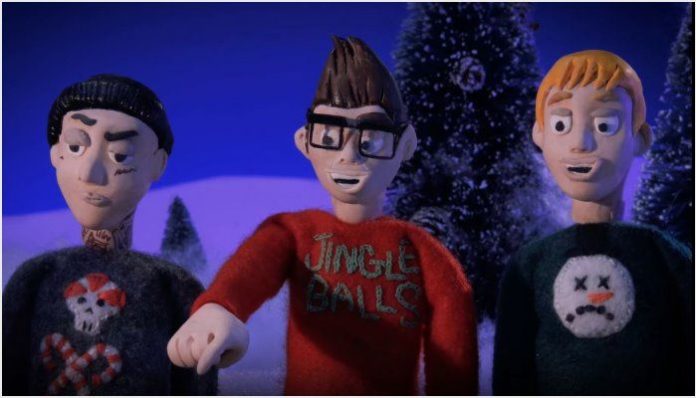 blink-182 dropped a new Christmas track “Not Another Christmas Song,” highlighting the downsides of the holiday season and causing a raucous on the North Pole.

This isn’t the first time they’ve made a festive track. In 2001, the band released “I Won’t Be Home for Christmas,” as a single which was later re-released on the 2003 comp A Santa Cause: It’s a Punk Rock Christmas.

Read more: 10 bands who should reunite after My Chemical Romance

Last year, Travis Barker teased a different Christmas song and while fans speculated it was a blink track, it turned out to be for The Goldfinger Christmas EP.

In November, during an interview with Hannah Stocking, Barker and his daughter Alabama were playing a friendly game of Jenga when he was asked the question “What artists are you listening to right now?”

Two days ago, Barker posted a snapshot of a claymation clip including some festive sounding instrumentals which we now know are the opening riffs for the new track.

Now, the track is finally here! The band announced the debut of the track on Twitter with the name and picture of the song’s cover.

Is it just us, or does it look like their logo is dripping blood?

The lyrics for the track highlight the thoughts of someone who is tired of Christmas and just wants the holidays to be over with.

The accompanying music video is a claymation of the band performing the song for elves in the North Pole. It’s not too long before the night makes a sour turn.

Check out the video “Not Another Christmas Song” below. The track is available to stream here.

blink-182 are fresh off the release of NINE, but the new tunes didn’t stop there as they joined Goody Grace on “Scumbag.”

The collaboration was months in the making (or years if you take into consideration Grace’s self-proclaimed fandom). In November 2018, the vocalist made a dream come true by joining the pop-punk trio as support on two nights of their Las Vegas residency, Kings Of The Weekend.

The onstage collaborations have become even more as Grace teamed up with Travis Barker and Mark Hoppus on “Scumbag.”

“blink-182 is the reason I started playing guitar when I was a kid,” Grace shares. “Their music helped me through my entire childhood and teenage years, and I couldn’t be more honored to have them on a song of mine. Travis Barker reached out to me last fall to open for blink in Las Vegas, and we’ve become great friends since then. I hope ‘Scumbag’ can be the anthem for people’s lives such as blink’s entire discography is for me.”

You can stream the track here.

What do you think of blink-182’s new Christmas song? Sound off in the comments below!