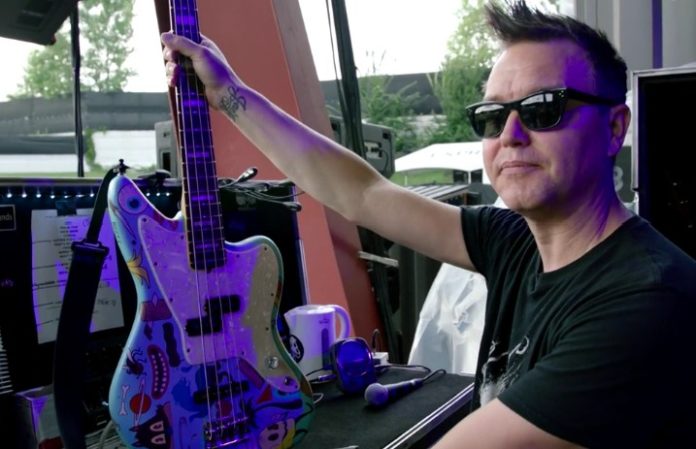 Mark Hoppus himself has clarified on Twitter that the below LSD story took place during a performance with his first band, not Blink-182. Thanks, Mark!

Blink-182's Mark Hoppus says the one time he did LSD was involuntary but caused him to bolt during an early-career gig, according to an interview with Red Bull TV. Check out Mark's not-so-fun acid story in the below video.

Prior to their performance at Lollapalooza in Chicago on Friday, both Hoppus and Blink-182's Travis Barker spent some time with Red Bull TV to show off their musical gear and talk shop. In the clip from Gearheads, Hoppus shows off his array of bass guitars and recalls his one-time-only acid experience:

“I have tried LSD but not on purpose,” says Hoppus. “When I was at a party, somebody was going around putting acid in people’s drinks. And, literally, like, the acid hit right as our drummer was counting in—at the very top of our set.

“I looked down at my bass and the strings just stretched on to infinity,” Hoppus continues. “I just felt this god-awful panic. And I took off my bass and I sat it down and I just started running through the desert.”

“But, yeah, that’s my one experience with acid,” offers Hoppus, the psychedelic drug topic seemingly prompted by an illustrated acid hit featured on one of his many Fender Jaguar basses. “I did not enjoy that at all.”

Blink drummer Travis Barker also got in on the Gearheads action, talking to Red Bull TV about his drum setup and dropping some inside info about his preferred method of onstage sound monitoring. Watch that video here:

In lieu of dropping acid, watch APTV correspondent Nick Major chat with Hoppus about “dropping the bass” at the 2015 Taste Of Chaos festival!

What do you think about Hoppus' LSD story? Did you catch Blink-182's set at Lollapalooza last weekend? Sound off in the comments section below!