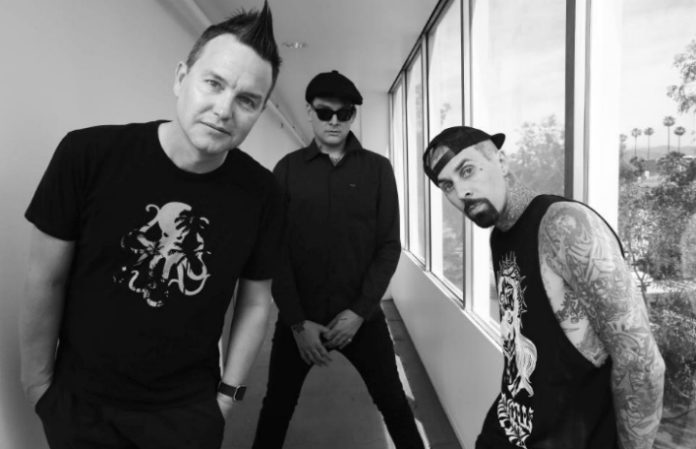 Blink-182 are already dropping hints for what fans can expect on their next album, the follow-up to 2016's California. While the band's Mark Hoppus admits they “haven't written any new songs yet” for their eighth album, the musician speaks in “broad terms” about the direction Blink is headed.

Read more: Blink-182's Travis Barker shares his version of the “Home Is Such A Lonely Place” video—watch

In a new interview with NME, Hoppus says, “We've already started talking about what we think the next album should be,” indicating that the trio may get “experimental” when they “start fresh next year” on a batch of new Blink songs.

Looking back on California and its jam-packed deluxe edition (for which Hoppus says every song they wrote was included), the bassist says Blink-182 want to “push that boundary again” after a more back-to-basics approach.

“We'll keep the core of Blink-182 but we'll get a little more experimental,” says Hoppus, recalling the band's fifth album in 2003. “Kind of like what we did on the untitled record, which we're all really proud of. It still sounded like Blink and had that Blink feeling, but it was different and a little more thought out.”

However, don't presume Blink will get political on the new record, even though they “all have very strong political beliefs.” Hoppus says politics are “not something we really put into our music”—the group's keeping things inclusive.

“I have enormous respect for bands that I grew up with like Rage Against The Machine, Bad Religion, Fugazi—even Nirvana were very vocal on their politics, but Blink's just not that band. There's definitely a place for it, but I honestly think that Blink is the kind of place where people come to escape that kind of thing. Our job is more escapism and more personal than worldviews.”

“Blink-182 is that eternal spirit of youth, of angst, of fun,” Hoppus says. “Everybody is invited to the party. We’re not these performers for you to fawn over—you're here to have a good time and hear some stupid jokes.”

Blink-182 are currently touring the UK. See the cities and dates below.