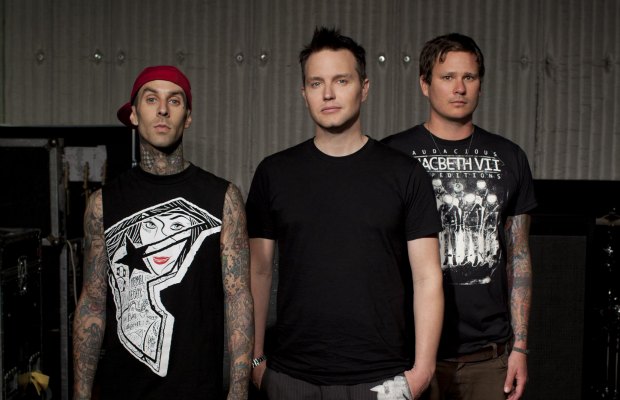 ORIGINAL POST: Blink-182 have, for the past couple of days, been teasing something in relation to their untitled, 2003 album, which turns 10 next month.

It is unknown whether the news will come in the form of a re-release, an anniversary tour, or some combination of the two. However, in a recent interview with AbsolutePunk, Blink bassist Mark Hoppus did admit that the band would be open to doing a 10-year tour.

The group began dropping clues yesterday on Instagram, all with stylistic and lyrical ties to Untitled, starting with the one below:

Most recently, Blink-182 posted this photo, which includes a cryptic series of numbers:

Fans seem to be in agreement that the first line is a time and date, which falls tomorrow, 10/21, at 7:30. The final four numbers of the that line, 1067, are the digits for Los Angeles radio station KROQ, 106.7. KROQ has a longstanding relationship with Blink, and their involvement with promoting this announcement adds even more likelihood to this assumption:

Can you figure this out? @blink182 @travisbarker @markhoppus @tomdelonge http://t.co/syOScKl9jV

The rest of the clue appears to be some sort of GPS coordinate. Though we haven't definitively determined the meaning of “101167,” 34.098007°N 118.32421°W are the exact coordinates for the Hollywood Palladium in Los Angeles.

What do you think this means? An announcement tomorrow on KROQ? A 10-year, Untitled anniversary show at the Palladium? More shows, a re-release, or something different entirely? Let us know in the comments!

EDIT: As many have pointed out online and in the comments, 101167 is the hex color code for a blend of cyan and magenta, the two colors featured prominently on the cover of Untitled and in all of the teaser posts. Do you think this is the final piece of the puzzle, or a coincidence?