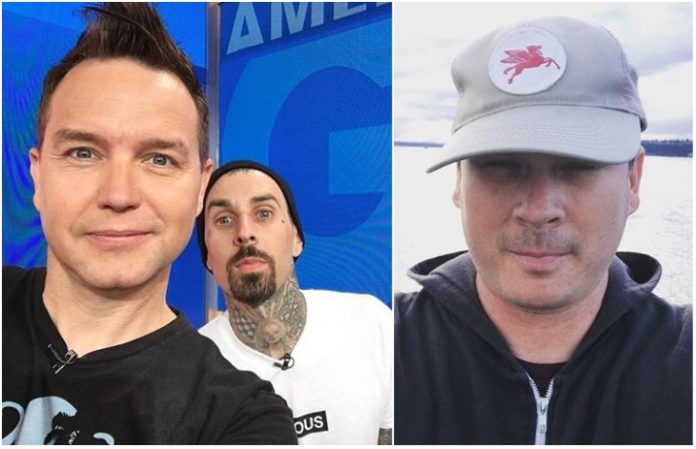 We were all wondering what was up last month when blink-182's Travis Barker and his erstwhile bandmate Tom DeLonge were hinting at an upcoming project together. Thanks to a recent radio interview with Barker, we now know that both DeLonge and blink-182 bassist Mark Hoppus will feature in an upcoming documentary from the drummer.

Read more: Mark Hoppus' Iceland story will give you chills

In December, DeLonge posted a pic on Instagram showing an ad hoc film set, saying, “Travis calls me and asks me to do an interview… next thing I know all these cameras have invaded my office.” What were the two musicians up to? Barker tells KROQ's Kevin And Bean this week that the filmed interview with DeLonge will be included in his upcoming documentary, a movie that also features interview footage with Hoppus.

“He just did a really important interview for my doc,” Barker says of DeLonge's participation in the forthcoming film, going on to name Hoppus and his father as additional documentary contributors. “[This] will basically [be] the counterpart to my book. So, four people were interviewed to create this trailer—and it was Mark Hoppus, my dad and Tom Delonge.”

If this is the first time you're hearing about such a documentary from Barker, don't be surprised. The blink-182 drummer tells the Kevin And Bean show that he hasn't spoken up about the doc publicly—well, until right now.

“I'm coming with surprises,” he says. “No, I haven't really said anything [yet]. It's been in the works—it was the same people who did Steve Aoki's documentary, and we started talking with them a while back. [It's] kind of being inspired by the book but then actually digging deeper. So, it has begun.”

Yep, it looks like Barker's upcoming doc will actually be an extension of his memoir, 2015's Can I Say, with the musician highlighting some life-changing events in his past, including the 2008 plane crash in South Carolina.

“It's one thing to read in a book, like, 'OK, this… happened to you.' Or, you know… 'Oh, you were in a plane crash.' But to actually see footage from it, and news clippings, and friends and family talking about it—it's just another level.”

When will this doc be out? “That I don't know,” Barker says. “Really soon.” Listen to Barker's KROQ interview here.