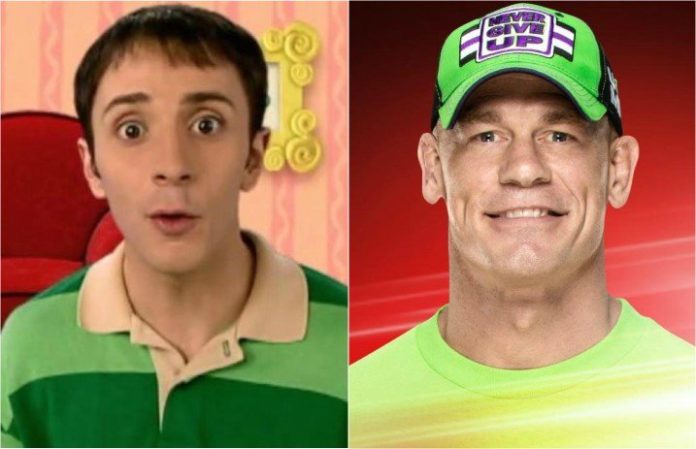 If you were a child in the late '90s to early 2000s, you probably have fond memories of turning on Nickelodeon and watching Blues Clues. Well, the show is coming back, and Steve Burns would be down to host—but there's another person with eyes on the hosting duties, too.

Is Cena really auditioning for the role? We aren't sure. But we are sure that he can pull off that green striped polol like nobody else. (Well, except Steve, of course.)

And Steve had to make a video to explain that he's willing to fight Cena for said hosting gig.

“I think if John Cena is serious about hosting Blues Clues, he and I should wrestle for it,” he says. “I'm calling you out, Cena.”

Watch the hilarious call out, shared by TMZ, below:

Of course, Nickelodeon had to chime in and say no fighting is necessary. Instead, they'll just find a green striped polo big enough for the both of them.

Maybe we can find a green striped polo big enough for both of you �� https://t.co/bgwXPXa0lM

Last week, Nickelodeon announced that Blue will be back on TV, with a casting call open as they search for a new host for the series. The show is currently working on bringing the adorable pup back to TV, with 20 episodes set to feature a “refreshed, but still signature” look with a new host.

And if you think you'd want to be the show's new host, then you're in luck. Auditions will be held on Saturday, April 14, in Burbank, CA. (You can check out additional audition info here!)

Blue's Clues launched in September 1996, and it ran for six seasons.

So, we have to ask… Who would win in a fight? Steve Burns or John Cena? Sound off below.