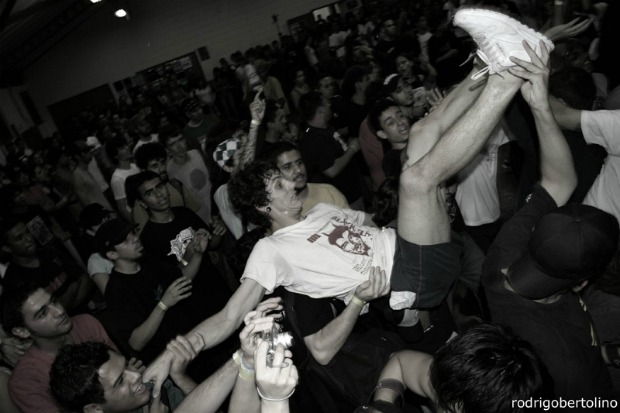 The Boston Herald is reporting that city police are seeking a crack down on moshing during concerts. The police department cited the Boston House Of Blues following a Feb. 21 show featuring Flogging Molly, according to the report:

“Boston cops cited the House of Blues for a license violation because of a mosh pit that broke out during a Feb. 21 show by Los Angeles band Flogging Molly. According to police, 60 concertgoers engaged in an 'aggressive mosh pit dance,' during which people were running and 'colliding into each other,' including some who were 'knocked to the ground.' No injuries were reported.”

The citation was issued because safety rules were violated and security did not intervene. The venue will be forced to put up illuminated signs saying moshing is not allowed after a City Hall meeting yesterday:

“City officials said they could not recall another instance when a Hub rock club was cited for a mosh pit, but cops vowed that dance- floor mayhem will not be tolerated.

'Dancing is a First Amendment right, but the behavior itself is a violation, especially when it becomes dangerous and a public safety hazard,' Boston police spokeswoman Officer Nicole Grant said.

The city’s licensing board took the matter under advisement after a City Hall hearing yesterday, while the club was ordered to put up illuminated signs saying moshing is not allowed.”

Many Boston-area musicians have taken issue with the crackdown. Unearth vocalist Trevor Phipp told the Herald, “This new anti-moshing policy proves once again that the city of Boston hates heavy music. It’s disheartening and maddening to know your hometown doesn’t support or understand your music scene.” The Red Chord frontman Guy Kozowyk added, “The city of Boston needs to stay out of it. I understand cracking down on fighting, but (moshing) is a form of expression. It’s ridiculous they’re cracking down on this now. There are plenty of other problems.”

What do you think? Have you ever experienced police intervention during a show? Was it necessary or not? Share your thoughts and stories in the comments.