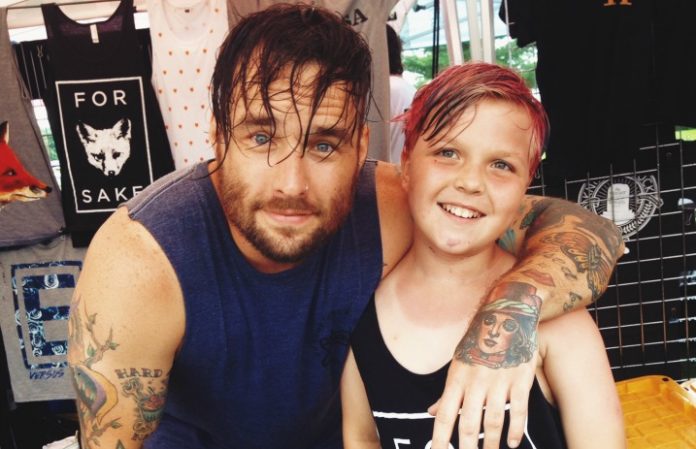 Riley a.k.a. Chooch is already cooler than you. (And has a better nickname, too.)

No, really. Can you say your favorite band;s frontman threw you into the crowd for your very first crowd-surf at 10 years old? Yeah, didn't think so.

“I am a long-time Emarosa fan,” says Riley's mom Erin Kelly, “so my kid grew up in that scene whether he wanted to or not.”

His first time seeing Emarosa live was at the 2014 Warped Tour, when he was 8 years old. “Immediately after the set, Riley got in line to meet Bradley,” Erin recalls. “I jokingly said, 'Tell him he's better than Jonny Craig,' not thinking he would actually say that, but I should have known better — because he totally did.”

But that wasn't the only memorable experience he'd have with Bradley Walden.

“Ever since then, Bradley has remembered him and has been unbelievably kind to us at every show we've gone to,” Erin says. “Last year in Lancaster, during their tour with Silverstein, he gave Riley a piggyback ride through the crowd during Emarosa's set, and then spotted him in the crowd at last summer's Warped Tour and brought him side stage. I thought Riley was going to pass out afterward!”

Oh, but wait; that's not all. At a show in Cleveland two weeks ago, Riley and mom watched Emarosa at Mahall's. “Before the show, Bradley said, 'If I see you in the crowd tonight, you're crowd-surfing!' We thought he was just joking, but nope! He called Riley on stage and launched him right into the crowd. It was so cool and also kind of scary (that's the mom in me talking!), but everyone in the crowd took care of him and he made it back safely.”

Check out the video Erin captured:

“Riley is very out-going and has a terrible time staying quiet,” Erin says, “but every time he's around Bradley, he's speechless. He really looks up to him, and loves the whole band in general.”