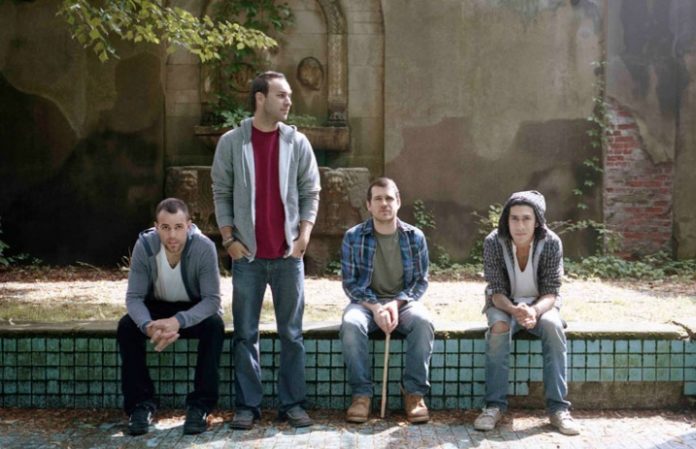 And a fan confirmed Spotify:

https://t.co/IYuwsuDO6M ITS ON SPOTIFY NOW

Brand New have now shared what their vinyl records will look like, and we can't wait for its October delivery.

And it turns out those sneaky Reddit users knew what they were talking about as the album is officially for sale, featuring the album title and cover art that was predicted. You can purchase the album here, along with an awesome Science Fiction shirt.

Internet theories are currently exploding after Brand New mysteriously announced a new album this week. Some sly Reddit sleuthers now say they have the album title, cover art, and even some of the song titles figured out.

Today, Reddit erupted with the news that fans were beginning to receive a perplexing Brand New CD in the mail. Reddit user xdarthbane says of the disc, “It has 1 song on it, it is 61:27 minutes long. The song is titled '44.5902N104.7146W.'” (Fellow Redditors quickly pointed out the song title's possibility as a geographic coordinate.) The CD's packaging also contains quotes from Stanley Kubrick's 1968 sci-fi epic 2001: A Space Odyssey.

And, now, here he are: Another new Reddit thread has popped up with one user, Parmersan, claiming that Brand New's LP5 album title is Science Fiction. The Redditor apparently ascertained the supposed LP5 moniker by using the music app Shazam. It's all beginning to make sense now, right? Isn't it?

The aforementioned Reddit thread also presents what is purported to be Science Fiction's album cover art, uncovered via the same method of music-identifying-app investigating. Check out that apparent cover art right here:

After some internet-detective work on AP's part, we've discovered that the above photograph is apparently the work of Swedish photographer Thobias Fäldt, as seen here from a 2015 feature on website Booooooom Design.

And some of the Brand New Science Fiction song titles that Redditors have seemingly figured out from their Shazam internet sleuthing? These include such apparent designations as “Out Of Mana” and “In The Water.”

What do you think? Is this stuff the real deal? Is the new Brand New album called Science Fiction? Is that awesome photograph the actual cover art?

I guess we'll find out!

Open the pod bay doors, HAL. Shit's about to get wild.