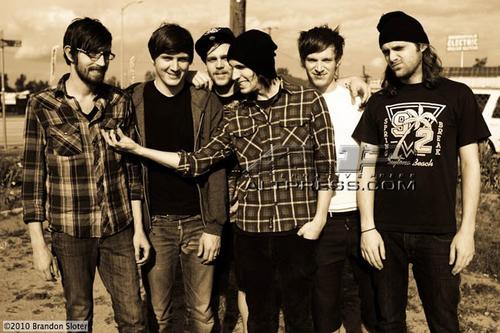 Vocalist Brandon Bolmer and drummer Tanner Wayne have both left Chiodos, the band confirmed today. Both former members released statements on their departures; here's an excerpt from Bolmer:

“The reality is this: I have had little to no contact with the guys, except for Tanner, since our last US tour in July/August 2011.  There may have been a phone call or two between Brad Bell and I, but they were short and sweet.  I must make it clear that I have nothing bad to say about any member of Chiodos.  Working and touring with them was mostly a great time other than a few hiccups here and there, it happens when you’re always together.  The guys know how to make a dark situation light, and we’ve had a lot of great laughs.  However, the last tour we did was pretty intense.  There were more frequent arguments, and it seemed that we were reaching a point of extreme frustration for the whole team.  There were talks on that tour about Jason leaving to go to school and spend more time with his wife, people said they were done with it, and at my lowest points of the tour, I had even said that I was done doing it.  It was a hard time for everybody.  When a band has to take steps backwards, its stressful.  Weather they admit it or not, I think this was the underlying reason for most of their unhappiness.  Nobody wants to take a step back, specially when you’ve been working hard for roughly 10 years to get where you’re at.

The reason for the lack of communication since the last tour is beyond me…It just seemed that one day, nobody wanted to talk about the band on a serious level.  At one point, a few months back, I sent an email to everybody in the band to see what the situation was for the future of Chiodos…again, it didn’t seem that anybody wanted to do the same.  Could it have just been me they didn’t want to speak with?  Possibly, I don’t know.  I feel that I put everything I had into Chiodos once I joined, dealt with a lot of pressure, bashing and whatnot,  and did the best I could for the situation… so I really don’t see any reason why I would be the main reason for all of this.  Maybe everybody was just…over it?

With that said, I have decided to leave Chiodos.  I know some may be upset with this decision, but people grow, we evolve, that’s life.  Sincere apologies to anybody that may be let down by this news.  Mentally, I left the band half a year ago….today is just the day Im making it public.  I’ve been in 2 bands over a 10 year period…singing and screaming, and it’s just time for me to do something different.  As far as the rest of the band goes, Im not sure what they plan to do…and to those thinking I may know some info on the whole “Craig trying to get back in the band” thing…I don’t know, and my opinion on that will remain personal.”

“Mentally, I’ve been out of Chiodos for a while now. Sadly enough, our personal and business relationships went to shit. Just being honest.

The last tour was the roughest of times for us. Within the first week I tore several ligaments in my right ankle and another member broke his foot. On top of that, I heard a member wanted to leave to go to school and start a family. That was it for me.

I tried to contact the band after the tour and they didn’t seem to care. That’s that.

Since the summer, I joined Emmure for a European tour with Suicide Silence as well as a US run. I am now apart of the Big Bad Production team, run by Sky Blu of LMFAO, as well as drummer for W.E.E.D, featuring Sky Blu and Shwayze.”

UPDATE 4:17 p.m. ET: Chiodos has released an official statement of their own:

“Hey everybody. Long time no update, we know. We figure it is about time for one after seeing the news today, that you've likely seen by now also. Unfortunately, Tanner and Brandon have decided to leave the band. We have been at a stagnant state for the last six months, so the fact that they are ambitious to move on with their lives is totally justified and understandable. We've had some killer experiences with them and were able to write one of our proudest albums with them in the hardest of times as a band. We ask for all of our fans continued respect and support towards them and us in our future endeavors. We must all keep looking forward……..“