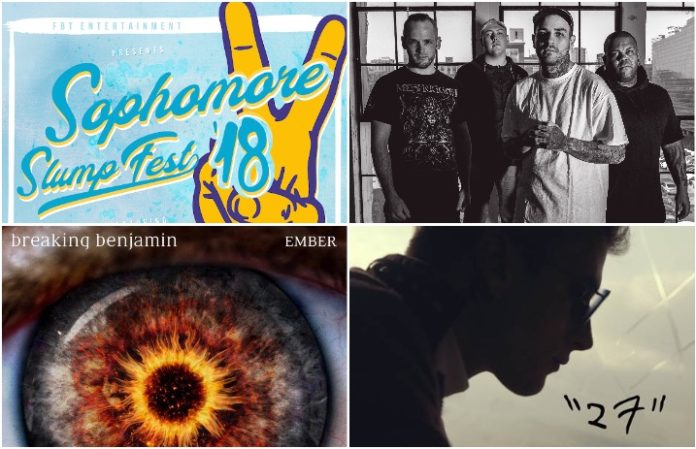 Watch new music videos from Emmure and Machine Gun Kelly—plus, don’t miss the final lineup for Sophomore Slump Fest. Check out the news you might have missed today below!

Emmure released a new music video for “Ice Man Confessions.” The band released the song to kick off their North American tour, which begins April 26. Grab your tickets here, and check out the tour dates below.

The day before his 28th birthday, Machine Gun Kelly released a music video for “27.” This track is on his new album bloom. You can check out bloom here.

We are proud to announce the official #SSF18 lineup! ✌️ On August 25, 2018, we’ll be hanging out with @microwaveatl @FreeThrowEmo @HeyitsFCC and more at @motorcomh in Durham NC! Grab your tickets here: https://t.co/xlbdRV6Snt pic.twitter.com/MCWLTnha48

Sophomore Slump Fest announced the final lineup. The festival takes place August 25 in Durham, North Carolina. You can get tickets here and check out the lineup below.

4. Breaking Benjamin's album debuted at No. 3 on Billboard 200

Breaking Benjamin’s EMBER debuted at No. 3 on the Billboard 200. The band sold over 88,000 equivalent album units, 80,000 of which were traditional album sales. Breaking Benjamin are embarking on spring and summer tours, and you can check out dates and purchase tickets here.