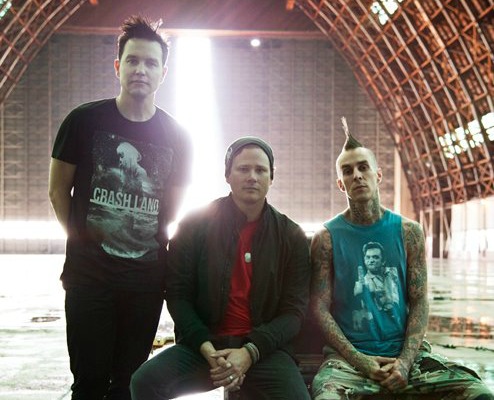 blink-182 has cancelled their upcoming appearance at Bamboozle. The festival has released a statement about the lineup revision, with My Chemical Romance taking the band's spot on the bill:

“The Bamboozle 2012 has revised its lineup for Saturday, May 19 due an emergency tonsillectomy for Travis Barker.  Blink-182 will be greatly missed and all of us at The Bamboozle extend our thoughts and best wishes to Travis for a speedy recovery.

The Bamboozle is pleased to announce My Chemical Romance has been added to the lineup and will perform before the Foo Fighters on the main stage on Saturday.

The Bamboozle is looking forward to celebrating its 10th anniversary and has an incredible musical lineup and non-stop entertainment planned for fans including headliners Bon Jovi, Foo Fighters, Skrillex, Incubus, Brand New, The Gaslight Anthem, Mac Miller, and more performers. The three-day event will be held on the beach and boardwalk at North Beach Asbury Park, New Jersey on May 18, 19 and 20.

Passes for single day, three-day and after parties are currently available for purchase. For more information about The Bamboozle please visit: www.TheBamboozle.com.

UPDATE 6:13 p.m. ET: blink-182 posted an update to their social networks a few minutes after the announcement, stating that the band's European tour was still on and that there would be more info on the North American dates soon:

UPDATE 6:20 p.m. ET:   blink-182 has now cancelled the majority of their upcoming North American dates. Two of the shows were rescheduled. Details:

“The members of blink-182 have announced today the cancelation of all their May 2012 tour dates due to a medical emergency. Blink-182’s drummer, Travis Barker, requires an urgent tonsillectomy with a recovery period expected to extend beyond the scheduled tour dates. The band apologizes for any inconvenience as a result of these cancelations and thanks their fans for their ongoing support.

The May 10th and 11th concerts at the Winstar Casino in Thackerville, OK have been rescheduled for September 13 and 14, 2012. All previously issued tickets will be honored on the new dates respectively. Refunds are available at point of purchase.

The following tour dates are cancelled and will not be rescheduled:
May 15 at Blue Cross Arena in Rochester, NY;
May 17 at the Verizon Wireless Arena in Manchester, NH; May 18 at Mohegan Sun in Uncasville, CT;
May 19 at The Bamboozle in Asbury Park, NJ;
May 20 at Sands Bethlehem Event Center in Bethlehem, PA;
May 22 at Colisee Pepsi Arena in Quebec City, Canada.