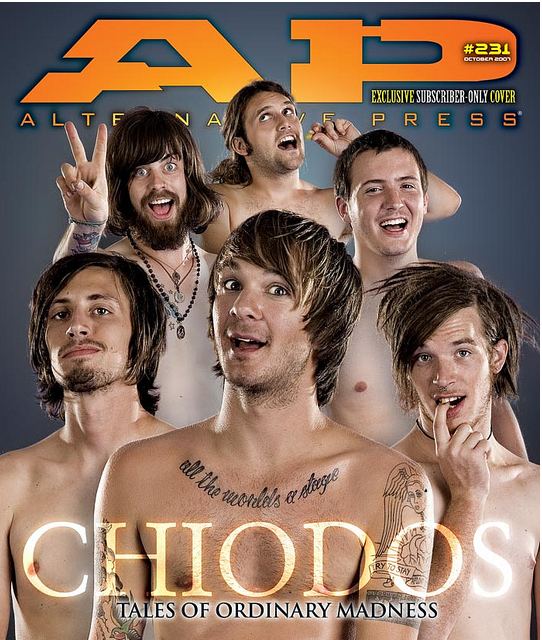 AltPress.com has received official confirmation that Davison, Michigan-based post-hardcore act Chiodos will be reuniting with original vocalist Craig Owens. No official word yet on the band's plans going forward, but we'll keep you posted on any developments. In the meantime, the band have released a new announcement video, which can be seen here.

Owens acrimoniously left Chiodos in Sept. 2009, with the band citing it as “necessary” in their statement at the time:

“To all of our friends, family, and fans: We would like to let you know that we have let Craig Owens go as the singer of Chiodos. This decision was a necessary one. Out of respect for all of the hard work that we have put in together for all of these years we will not be discussing the specific reasons that this needed to happen. We wish Craig well . We will absolutely be continuing on as a band and we will keep you informed as this next chapter unfolds. Chiodos fans are the best fans in the world and all we can ask of you, after everything you have already given us, is to share in our excitement for this next album. We promise you will not be disappointed…………Brad, Jason, Pat, and Matt”

Owens responded to the statement the following day, saying “thank you for all of your support. i'm going through a tough time & need some time to figure things out. your support means the world to me.” Chiodos recruited Brandon Bolmer (ex-Yesterdays Rising) as Owens' replacement, who recorded one album as the group's frontman (2010's Illuminaudio) before departing in March along with drummer Tanner Wayne. There's also no word yet on who will be replacing Wayne behind the kit.

Owens went on to form Destroy Rebuild Until God Shows in 2010. The band released their debut full-length D.R.U.G.S. in Feb. 2011 and co-headlined the AP Tour in spring of that year. The status of that band going forward is unclear–Altpress.com will keep you posted on any developments in that department as well.

This announcement brings up several questions:

For the record, I fully support @Chiodos and @CraigOwens on their journey.Nothing but love for all you guys.

UPDATE 6:00 p.m. ET: Some musicians/industry folk have been reacting the news of Owens' reunion with Chiodos. Check them out below.

Chiodos are some of my best friends, this is awesome.

JD Dunlap, South By So What?! Festival:

so happy to hear that @Craigowens and Chiodos are back… long overdue right???

All's Well That Ends Well is an album that changed my life. So stoked for this chiodos.net