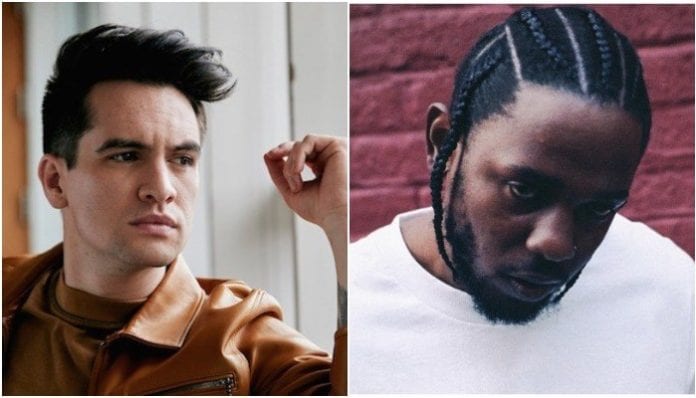 The Reading & Leeds festival is almost here, and it appears that Panic! At The Disco‘s Brendon Urie can’t wait to co-headline it with Kendrick Lamar.

Read more: Shawn Mendes reacting to Panic! At The Disco’s VMAs performance is all of us

In a new interview with Kerrang! the Panic! At The Disco frontman talked co-headlining this year’s festival with hip-hop artist Kendrick Lamar and doing a possible collab.

“Oh my god – there’s no greater honour. I’m such a huge Kendrick Lamar fan, and I have so much respect for the guy. I can’t wait to see him – I’ve never had the chance to see him live before, and I know that it’s going to blow my mind! I’m not all about pressing too hard, but if [a collaboration] happens then it happens.”

“That’s very much how it’s been on this tour: it’s been really organic, and no-one has had to push anybody to do anything that they haven’t wanted to. But I would throw the idea [to get Kendrick onstage during Panic!’s set] out, for sure! I’m such a big fan that I feel like I’m honoured to even just watch him.”

In addition to a possible collab with the hip-hop icon, Urie also shared how much he loved the diversity of this year’s festival lineup.

“I think it’s cool to have a line-up that’s so eclectic,” he continued. “There are so many diverse acts going into it, and there’s something very exciting about that. There’s no rules, and it doesn’t just have to be rock artists, or one genre; it can be all of these artists compiled together to create something really different and really fun. I love it!”

We’re beyond excited seeing all of these acts grace the stage at this year’s Reading & Leeds Festival, and we’re glad Brendon’s excited too.

Panic! At The Disco recently announced the second leg of their Pray For The Wicked Tour, which will see us praying for the wicked across North America well into 2019 with support from Two Feet.