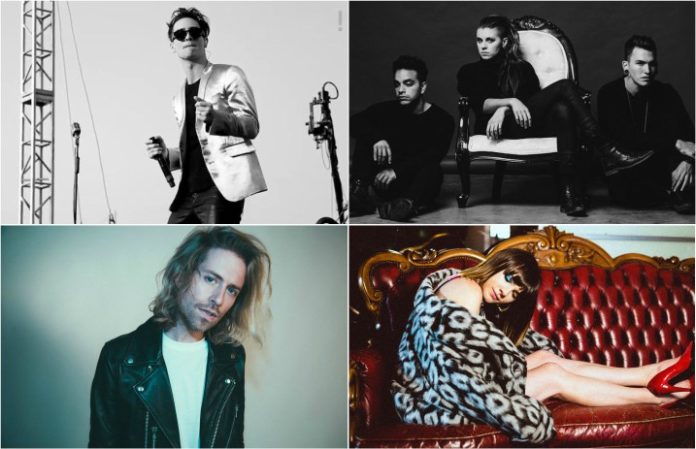 Ahhh, let the three-day weekend begin! We have an amazing limited edition shirt from Panic! At The Disco's Brendon Urie, as well as limited edition vinyl from the Rocket Summer. Catch up on all the news you might have missed below.

Read more: Eighteen Visions debut new single and other news you might have missed today

Tonight's the night that Brendon Urie makes his Broadway debut as Charlie Price in Kinky Boots. To celebrate, these limited edition T-shirts will be available to purchase—but only 100 per show. He'll be in the show from May 26-Aug. 6.

VickyT's new single “Ghost” was also accompanied by a music video and was released via Baeble Music. About the tune, VickyT says, “'Ghost' is a song I wrote after returning to London for the first time since a breakup. Every corner, every building reminded me of my ex and I kept mistaking other people for him. It was a really hard time for me but resulted in this song which is one of my favorite tracks.”

The Rocket Summer releasing Do You Feel on white vinyl.

For the first time, the Rocket Summer will be releasing their hit album, Do You Feel on vinyl. The record will a gatefold double white album. “Fans have been asking since the album's original release 10 years ago if it would ever finally come out on vinyl. I think I've been longing for it maybe just as much,” Bryce Avery says. You can pick it up here. The Rocket Summer are also heading out on a 10-year anniversary tour of the album this summer. See dates below.

8.5 The Foundry at the Fillmore Philadelphia, PA

PVRIS' upcoming release, all we know of heaven, all we need of hell is not only coming out in the traditional digital and CD but the band have also just announced a limited edition cassette tape. The release hits Aug. 4 and you can pre-order it here.

The legendary rock band have added another leg to their Not In This Lifetime reunion tour. They've also announced a handful of openers.  ZZ Top, Deftones, Sturgill Simpson, Royal Blood, Live, and Our Lady Peace are all set to join the band on select shows. See the dates below. You can grab tickets here.

Watch more: Mayday Parade, Broadside & more Play “This Or That?”