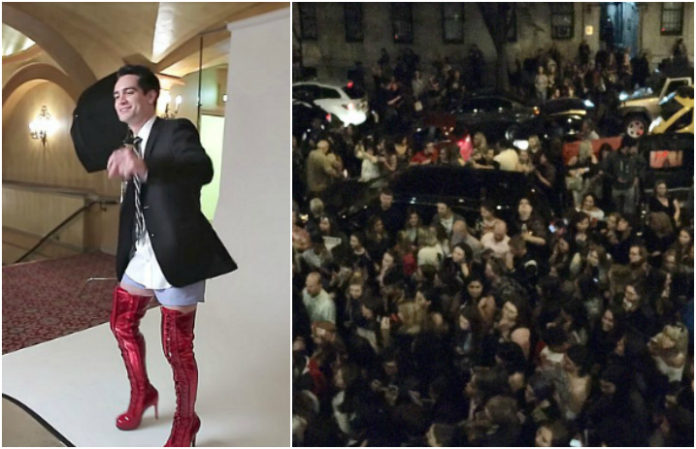 Panic! At The Disco's Brendon Urie has made his Broadway debut as Charlie Price in Kinky Boots, and fans packed the streets to catch a glimpse of Urie after the performance—and it's unbelievably huge.

See the pictures below!

The photo below proves fans are just as excited to see Urie on Broadway as we are. Check out the crowd waiting to see Brendon after the perfomance! (Plus, hear them sing “This Is Gospel” and wish you were there to sing along!)

@panicatthedisco fans at the @kinkybootsbway stage door singing “This Is Gospel” waiting for @brendonurie on his opening night • (video: @jessnort)

You guys were amazing and insane but you were good. First night didn't ruin him signing so congrats!!! pic.twitter.com/mXGJjhargH

However, Panic! At The Disco posted a message to Twitter to remind fans to be courteous to the cast and other people at the performance.

Please don't run out of the theatre before the play is over. Let the cast take their bows. We aren't rushing out so neither should you.

Playbill recently posted a preview clip of the Act II number, “Soul Of A Man,” which you can check out below!

Do you have tickets to see Brendon on Broadway? Let us know in the comments below!