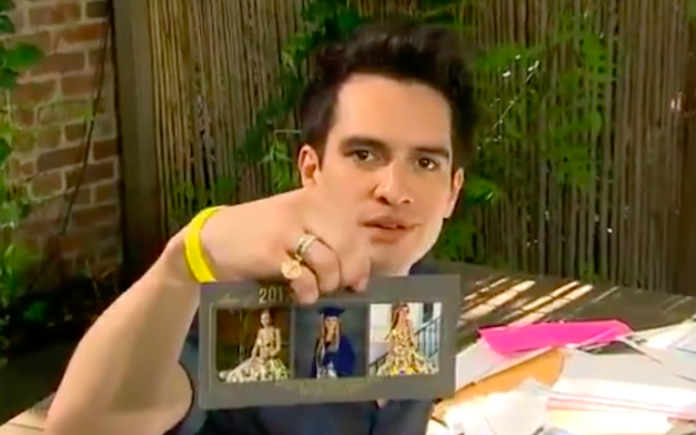 Panic! At The Disco's Brendon Urie joined the legendary Cyndi Lauper on ABC Nightline to chat with anchor Dan Harris, making this one special you didn't want to miss.

Check out more from their Nightline appearance below.

In the special, Urie opens up a box full of fan mail, receiving everything from Frank Sinatra CDs and piñatas (piñatas!) to graduation photos. He even gives a tip to future fan mail senders: It makes his life easier if you send a return envelope! “You already put a postage stamp on here, absolutely I’ll do that,” he says.

The entire interview is charming AF. But would you expect anything else from Urie?

Later on, he touches on why it’s so great that his fans are young — and it’s the best reason: “It is really neat that most of the fans are younger kids because that just shows me that there’s potential for something great in the future from the stuff I read.”

So, ladies, gents and young fans, Urie does read your fan mail, and you all give him hope.

The Nightline interview also includes an interview with Urie and Cyndi Lauper, who discuss how they prepare their voices before singing.

Urie announced in early April that he would be appearing in Broadway's Kinky Boots, and his excitement has spilled over into every performance and interview since. According to Playbill, Kinky Boots' capacity has increased over 90 percent since Urie's debut, while it's gross potential has hovered around there as well. These are very impressive statistics considering this is the very first time the frontman has been approached to do Broadway.

If you haven't caught Urie on Broadway yet, you'll want to do it soon—his Kinky Boots stint ends August 6!

Watch more: APMAs 2017 Artist Of The Year: PANIC! AT THE DISCO