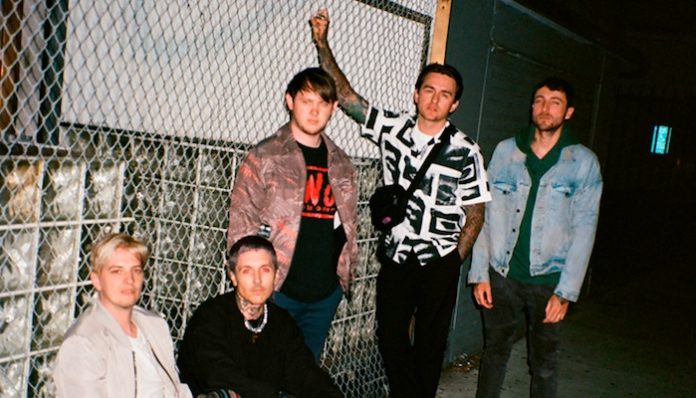 It looks like fans will get to hear the next song off of Bring Me The Horizon‘s new EP POST HUMAN: SURVIVAL HORROR very soon.

This week, BMTH began teasing the video release for their new track “Teardrops.”

POST HUMAN: SURVIVAL HORROR is part of an anthology of EPs Bring Me The Horizon plan to release over the next year.

“We’ve just been winging it and recording from lockdown,” Oli Sykes previously shared. “Now we’re going to make four different records over the next year and they’ll all share the name POST HUMAN.”

Now, it looks like Bring Me The Horizon are gearing up to release the next song from the new EP. On Tuesday, the band shared a behind-the-scenes photo from what appears to be a recent video shoot.

Then, on Wednesday, BMTH dropped a teaser that confirms they are releasing a video for “Teardrops” on Thursday, Oct. 22. The video focuses on Sykes as he deals with everyday pressures including stress, anxiety and addiction.

“Teardrops” joins a slew of other tracks on POST HUMAN: SURVIVAL HORROR including collaborations with Evanescence‘s Amy Lee, BABYMETAL and Nova Twins.

As Sykes previously revealed, POST HUMAN: SURVIVAL HORROR is a protest record. Each song is about the strong emotions we all feel during political unrest or times of injustice.

“So for the songs we are working on for this new record, we knew that they were going to be a bit more aggressive in nature,” Sykes said. “This first record is very much a protest record. It’s trying to capture the anger, sadness, frustration, fear, paranoia and everything I think we are all collectively going through right now.”

Back in August, Jordan Fish shared that BMTH have plenty of collaborations in store for the POST HUMAN project. For the multi-release, they hope to bring in even more artists for some unexpected collaborations.

“I think we might kinda like theme our guests a bit more around what’s going on with each EP,” Fish said. “When we get into the other EPs, it’ll give us a chance to maybe get some other people on who are a bit more left-field or a bit more out of the box for our band.”

As well, all of the new collaborations will be based on the themes and overall sound for each POST HUMAN EP.

“Cause we’re gonna have like probably four different kinda EPs with different vibes it gives us a bit more of an opportunity,” Fish said. “Whereas on amo, we had three guests there from completely different worlds.”

Earlier this month, Fish also revealed that BMTH have referenced Linkin Park while recording their new music. For the Hybrid Theory anniversary, he said that that album in particular has greatly influenced Bring Me The Horizon over the years.

“Even with the record we’re doing right now, we still reference them,” he said “They’re one of those bands that I always have in the back of my mind when we’re thinking about where a song should go next. It’s the Bible for heavy, catchy music that combines electronic and pop music, which is our brief. They just covered so much ground and did it with such class on that album.”

To further celebrate their POST HUMAN era, Bring Me The Horizon have also announced new UK tour dates for next year. The tour kicks off in Glasgow on Sept. 21, 2021.

📢 ANNOUNCING – @bmthofficial will be HERE on 21 Sept 2021 with the Post Human Tour!
Tickets on sale 10am, Fri 23 Oct https://t.co/JcFW7yBDXg pic.twitter.com/eKavxiV0yC

Which song off of POST HUMAN: SURVIVAL HORROR are you most excited to hear? Let us know in the comments below.