Brittany Howard has officially won Best Rock Song at the 2021 Grammys for “Stay High.”The award was presented during the Grammy Awards Premiere Ceremony.

Howard was up against a stacked list of nominations including Phoebe Bridgers’ “Kyoto,” Fiona Apple’s “Shameika,” Tame Impala’s “Lost In Yesterday” and Adrianne Lenker of Big Thief’s “Not.”

In her speech, Howard goes on to thank her family, the Grammys Academy, her managers Kevin Morris and Christine Stauder and her band. As well, she gave a special thanks to her sister.

“I want to thank my sister who the album is named after, it’s called Jaime,” she says. “Thanks for being my guide and teaching me about music.”

You can follow along with the rest of the 2021 Grammys winners here and watch Howard’s acceptance speech below.

This is a pretty historic win for both Howard and the Best Rock Song category. To date, only five other women have taken home this award. Alanis Morissette won in 1996 for the iconic “You Oughta Know” and in 1999 for “Uninvited.” In between then, Tracy Chapman won for “Give Me One Reason” in 1997.

As well, Howard’s song “Goat Head” is in the Best R&B Performance category while “Short and Sweet” is up for Best American Roots Performance. This means that Howard’s new music spans four different genre categories at this year’s Grammy Awards.

Back in December, she revealed to Entertainment Weekly that it’s incredibly gratifying to have one album nominated in multiple genre categories.

“The thing I was most excited about, honestly, is one album being nominated for so many different genres,” Howard told Entertainment Weekly. “That’s really unusual. That’s exactly how I wanted it to go, because I like all kinds of music and I create my music just with whatever I’ve heard before.”

Throughout Howard’s career, she has earned a staggering 16 Grammy nominations and 4 wins for both her solo music and work in Alabama Shakes. In 2020, Howard was nominated in the Best Rock Song category for “History Repeats.” The same song was also nominated for Best Rock Performance. In the end, Gary Clark Jr.’s “This Land” won both categories.

This year, Howard is taking the Grammys stage for a special performance. She is among artists such as Harry Styles, Post Malone, Taylor Swift and Doja Cat who are also performing during the awards show.

Howard plans to bring her new music to Las Vegas’ Life Is Beautiful Festival this Sept. 17-19. She is set to perform alongside Billie Eilish, Green Day, and LANY among others this fall.

You can stream “Stay High” below.

Bridgers’ Best Rock Song nomination marks the second for her hit single “Kyoto.” The Punisher track was also up for Best Rock Performance, a category that includes a historic all-female nomination list for the first time. Along with these two Grammy categories, Bridgers is also nominated for Best New Artist and Best Alternative Music Album for Punisher.

Since the release of Punisher in June, Bridgers’ career has soared. After the full-length peaked at No. 6 on the Billboard Album Sales chart, she released her Copycat Killer EP. The four-track release includes reimaginations of her songs “Kyoto,” “Savior Complex,” “Chinese Satellite” and “Punisher.”

Last month, Bridgers also made her debut on the coveted Saturday Night Live stage. She also recently revisited “Kyoto” for an emotional new rendition with singer-songwriter Jackson Browne. The latest version is part of Spotify’s Singles series that features this year’s Best New Artist nominees. For the series, Bridgers also released a cover of one of her favorite John Prine songs called “Summer’s End.”

As well, Bridgers is among the artists teaming up with Paul McCartney to reimagine his 2020 album. McCartney III Imagined features St. Vincent, Queens Of The Stone Age’s Josh Homme, Idris Elba and Dominic Fike among others. For the new release, which arrives on April 16, Bridgers recorded a new rendition of McCartney’s “Seize The Day.”

You can stream “Kyoto” below.

Back in 1998, she won her first and only Grammy for Best Female Rock Vocal Performance, now Best Rock Performance, for “Criminal.” To date, this song still remains one of Apple’s most popular and currently has over 58 million streams on Spotify.

Apple had a great run on the charts with Fetch The Bolt Cutters after its release last April. The album, which is her first in nearly eight years, debuted at No. 1 on both the Billboard Top Rock Albums and Alternative Albums charts. She achieved the exact same chart-topping success with The Idler Wheel… follow its release in June 2012.

These days, Apple is continuing to fight for social justice. Her social media is flooded with posts and stories about topics such as International Women’s Day and Black Lives Matter. More recently, Apple has been fighting to keep virtual courtrooms open amid the COVID-19 crisis so court watchers can observe bail proceedings. 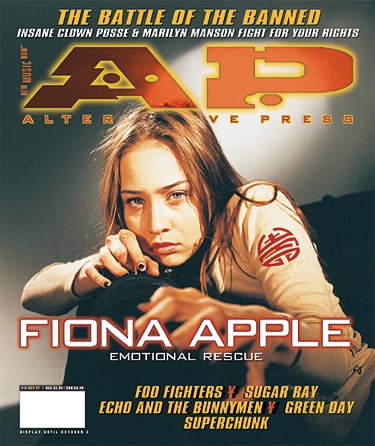 You can stream “Shameika” below.

This year, Tame Impala snagged a Best Rock Song nominated for “Lost In Yesterday.” Alongside Bridgers, Apple and Howard, Tame Impala are also included in the Best Alternative Music Album category for their LP The Slow Rush.

The latter nomination marks Tame Impala’s third time being recognized in that category. Back in 2014, they earned their first Grammy nomination in Best Alternative Music Album category for Lonerism. However, they lost to Vampire Weekend’s Modern Vampires Of The City.

Then in 2016, they were nominated again in the same category for Currents which lost to Alabama Shakes’ Sound & Color. This means that all of Tame Impala’s studio albums excluding their debut LP InnerSpeaker have earned Best Alternative Music Album nominations.

In the United States, The Slow Rush gave Tame Impala their highest-ever chart appearance. The album went on to debut at No. 3 on the Billboard 200 and sold 110,000 equivalent album units in its first week. This chart debut beat Currents which earned just 45,000 first-week sales after its release in 2015.

Although things are looking very different elsewhere in the world, concerts are making a comeback in Australia amid the COVID-19 pandemic. This week, Tame Impala returned to the stage in Perth for a special performance.

You can stream “Lost In Yesterday” below.

Big Thief are already familiar with being Grammy nominees. Last year, they earned their first-ever Grammy nomination in the Best Alternative Music Album category for U.F.O.F. In the end, the award ended up going to Vampire Weekend‘s Father Of The Bride.

Now, they’ve received two more nominations thanks to their song “Not.” Adrianne Lenker is not only nominated for Best Rock Song for “Not,” but Big Thief are also nominated in the Best Rock Performance category for the track.

“Not” appears on Big Thief’s latest album Two Hands which follows up U.F.O.F. As it turns out, both albums were released in 2019, showing the dedication and craft Big Thief have for the music they create.

According to NPR, the band began recording Two Hands just days after finishing up U.F.O.F. All of the vocal takes were done in one or two takes and the instruments were tracked live. Out of the album’s 10 tracks, “Not” stands out. In fact, it is the highest streaming song from the album on Spotify with almost 10 million plays.

You can stream “Not” below.

What are your reactions to the winner of the Best Rock Song category? Let us know in the comments below.