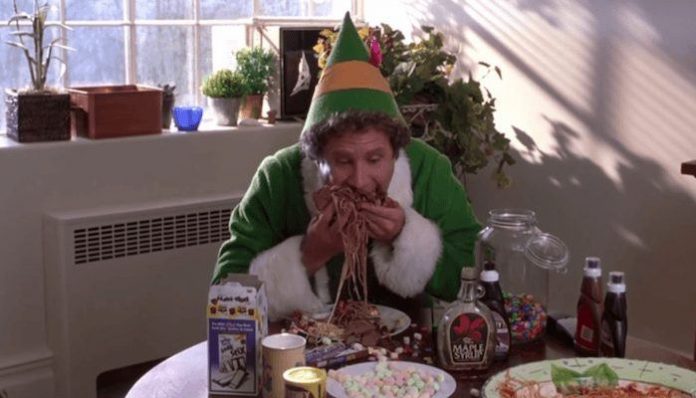 We’re barely past Halloween and weeks away from Thanksgiving, and yet it’s hard to go anywhere without seeing something Christmas-related. A restaurant in Chicago is no exception to this as they just revealed an Elf-inspired dish.

Read more: Apparently this governor is a huge blink-182 fan like us

In the film, Buddy (iconically played by Will Ferrell), goes wild in the kitchen when making his own breakfast. The elf piles marshmallows, various candies and Pop-Tarts on top of a heaping serving of spaghetti. He, tops it off with maple syrup before mashing it together and shoveling it in his mouth with his hands.

Miss Ricky’s took the scene as inspiration for their latest restaurant item. The Spaghetti Sundae features spaghetti topped with strawberry, coconut, chocolate, and raspberry sauce. From there, marshmallows, S’Mores Pop-Tarts, M&Ms, Oreos, and Fruity Pebbles are added. Of course, it also comes with a side of maple syrup you can add yourself.

The dish is a whopping $15, which might be worth it depending on how much you love Elf. The film celebrates its 15-year anniversary, which the restaurant revealed is the reason behind this limited-time dish.

Check out the photo below, and pick up your own at Miss Ricky’s from now through Christmas.