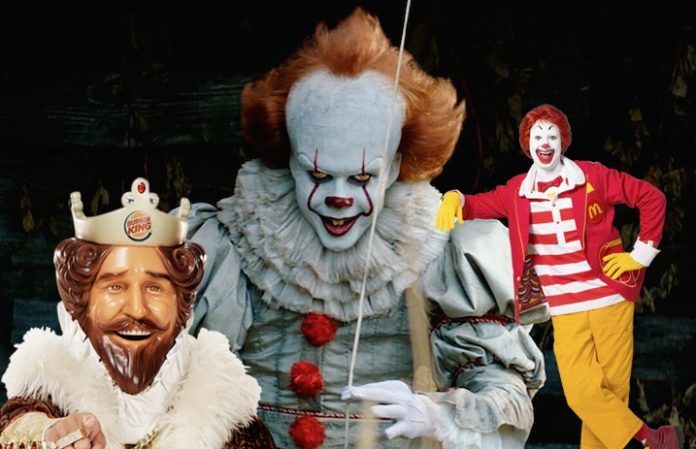 If you caught the new adaptation of Stephen King's It in theaters recently, did you find yourself thinking, “Wow, I could really go for a McDonald's hamburger right now”? Because that's apparently Russian Burger King's line of thinking: They want to ban It because of Pennywise's resemblance to Ronald McDonald.

Read more: 'It' is now the highest-grossing horror film of all time

According to the Hollywood Reporter, Burger King Russia is petitioning the country's Federal Anti-Monopoly Service to ban It from theaters. The fast food chain argues that the movie's Pennywise The Dancing Clown character looks enough like Ronald McDonald to actually give McDonald's an advertising edge.

As reported by io9, It has been in Russian theaters since Sept. 7 and, while the Federal Anti-Monopoly Service has evidently viewed Burger King's request, there's so far no word of the film being pulled from the country's theaters.

As Slipknot's own clown M. Shawn “Clown” Crahan tells AP, picking a fight with Ronald McDonald might not be the shrewdest business move. “We gotta be careful what we say about Ronald,” Crahan says. “He wears the crown, whether we like it or not. Over five billion served! You gotta eat to live.”

“You gotta kinda bow to that clown,” Crahan adds. “That clown will fuck you up.”

What do you think of Burger King Russia's call for an It ban? If you saw the film, was there honestly ever a point in the movie where Pennywise reminded you of Ronald McDonald? Sound off in the comments below.

And, um… send in the clowns?