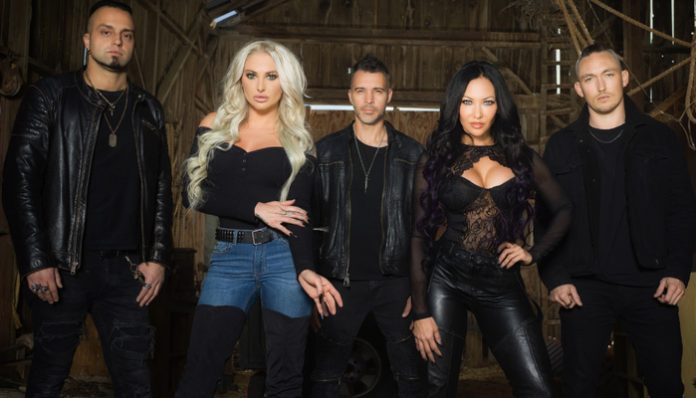 It looks like Butcher Babies couldn’t wait any longer to share even more new music with fans.

On Friday, they debuted their powerful new single “Sleeping With The Enemy,” the second song to be released from their forthcoming album.

Read more: You’ll have to pay more to see all of these new shows heading to Disney+

Last month, Butcher Babies celebrated their 10th anniversary as a band by releasing the first song from their upcoming LP. “Bottom Of A Bottle” is a personal ode to pain and past relationships that deals with using alcohol to try and forget about those hurtful memories.

Heidi Shepherd exclusively told Alternative Press that Butcher Babies’ upcoming album will be another piece of strong and emotional work in their discography. Ultimately, they hope these new songs will unite fans during these uncertain times.

“Our fanbase has been so open about how our music has meant to them over the years,” Shepherd said. “That’s all I ever wanted, to be heard and felt. This is our fourth album together, and we’ve had a lot of time to purge all emotions into our music. We can only hope that these new songs make people feel powerful with a sense of unity during the chaos that is 2020.”

Read more: There’s only one way to see The Starting Line perform these iconic albums

Now, Butcher Babies are offering another taste of their new album. On Friday, they unleashed their powerful new single “Sleeping With The Enemy.” Shepherd explains that this song is all about finding yourself amidst the chaos and obstacles life throws at you.

“This song is about hypocrisy and self-realization,” Shepherd says. “We can get so caught up in the rat race of life, as humans we tend to lose track of ourselves and our core values along the way. There comes a point where you look at the perceived problems in your life and realize there is one common denominator — yourself! Whether it’s in the lens you look at life through or an overall attitude, there comes a point where we must turn a negative into a positive. This song is that for me.”

Butcher Babies’ upcoming album is slated to arrive sometime in early 2021. In the meantime, Butcher Babies have a special event in store for fans.

Next Friday, Butcher Babies are hosting their “1st Annual Office Christmas Party” livestream. The 90-minute event officially kicks off on Friday, Dec. 18 at 8 P.M. ET and will include performances of some fan-favorite tracks. As well, it looks like Butcher Babies plan to play some of their new songs live for the very first time.

“You are formally invited to join us for an evening of whiskey guzzling debauchery! We’ve planned a 90 min set full your fave BB songs. We’ll also be playing a few unreleased songs Join us on 12/18 for our first & last full show of 2020.”

Tickets for the event are available here and start at $20.

You are formally invited to join us for an evening of whiskey guzzling debauchery!
We’ve planned a 90 min set full your fave BB songs. We’ll also be playing a few unreleased songs🤗Join us on 12/18 for our first & last full show of 2020.
Tix & Vip avail at https://t.co/4wteODcQid pic.twitter.com/v9RrRIW50E

What are your reactions to Butcher Babies’ new single? Are you going to tune in for their livestream next week? What songs do you want them to perform? Let us know in the comments below.