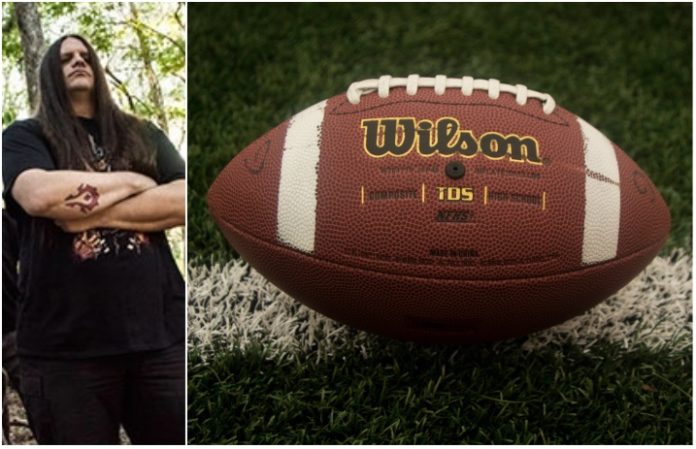 Cannibal Corpse vocalist and football fan George “Corpsegrinder” Fisher is speaking out about the recent U.S. national anthem protests that have certain NFL players kneeling, instead of standing, during the pre-game ritual.

The much-publicized protests began when former San Francisco 49ers quarterback Colin Kaepernick kneeled during the national anthem before a 2016 preseason game. The player's silent protest was meant to draw attention to police brutality and social injustice, as noted by the New York Times. The protesting tradition has only gained steam since that occurrence, with more NFL players participating in the take-a-knee practice this football season.

In September, President Donald Trump called for NFL owners to fire the protesting players, as reported by CNN. (In the widely-reported demonstration of his hope for a team owner's possible response to the situation, Trump said, “Get that son of a bitch off the field right now, he's fired. He's fired!”)

On this week's Metal Sucks podcast, as pointed out by Metal Injection, Fisher, the longtime Cannibal Corpse frontman, offered his take on the polarizing protests, discussing what he thinks about certain NFL players taking a knee.

“There's obviously problems in this country and I think that was the original reason for all of this stuff happening,” Fishers says. “And so, how can anybody be against people wanting everybody coming together and treating everybody the same and fairly and equally? I'm all for that.”

“I mean, I would stand, if it was me,” says Fisher. “I don’t have a problem with people standing and linking arms.” However, the musician offers his understanding of the take-a-knee protests. “If you can listen to what people are saying, and say, 'We're not disrespecting the flag and our country, and we love our country, we're just trying to make people start talking about this stuff and do something about it.' I don't have a problem with that at all.”

“It's your life, you do what you want,” Fisher adds. “Cannibal Corpse has never been about politics, and we all obviously have our own opinions.”

Cannibal Corpse's new album Red Before Black is out now.